What does tweeting at Annual Meeting accomplish?

What does tweeting at Annual Meeting accomplish?

For years, attendees of the Massachusetts Conference Annual Meeting have been asked to turn off their phones and other devices so as not to be disruptive. This year, they were given quite the opposite instruction - they were asked to turn ON their smartphones, tablets and laptops and to tweet (post short messages via twitter.com) about the meeting using a particular hashtag (#macucc2012).

For those unfamiliar with Twitter, using a common hashtag made it possible for anyone - Twitter user or not - to view all the tweets related to the meeting via a Twitter search or by visiting the Annual Meeting page on the Conference website.  (The tweets are now too old to be found by searching Twitter, but can still be seen via Topsy. A sampling is below.)

So, what was the result?  Well, about 100 tweets were sent by 20 people during the two-day meeting. The tweets included photos, one-line updates on the business and many quotes from the various speakers. They also included links for more information about various items being discussed.

Some of the tweets were lighthearted, such as one commenting on the large number of Toyota Prius' in the parking lot with a picture of Jim Antal's UCC license plate, 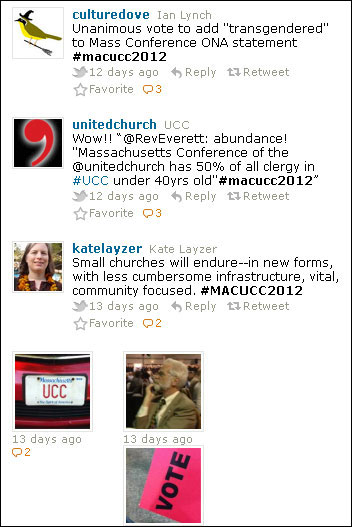 Other tweets shared news bulletins from the meeting - such as Wendy Miller posting: "Unanimous decision to include gender identities and gender expression in our ONA processes. Praise God!" and Jim Antal tweeting: " macucc2012 votes to ratify uGov at national ucc" referring to the ratification of a new unified governance structure at the national setting.

The tweets also allowed for some ecumenical sharing, with Massachusetts Council of Churches Executive Director Laura Everett tweeting a picture of attendees raising their red voting cards, with a caption stating this is what voting looks like in the UCC. She has posted similar pictures from other denominational gatherings she has visited throughout the state.

But perhaps the most illuminating tweets were the seemingly random facts and quotes that were shared throughout the meeting, such as:

As a former news reporter who has been writing about Conference Annual Meetings for 16 years, I was struck by the fact that these little nuggets that were being tweeted were exactly what I would have jotted down for use in an article (had I not been so preoccupied with other tasks). Seeing those tweets scrolling across the screen of my phone made it seem as if I had a dozen reporters in the room, taking notes for me.

What does all that accomplish? Honestly, I'm not sure. I would never suggest that following tweets at home is a substitute for attending the meeting, or even for reading coverage of the meeting after the fact.  But perhaps for those who are there, the tweets help reinforce concepts and ideas - reminding them of what they heard, and letting them know someone else thought it was important, too.  And maybe for those who were not at the meeting the tweets will be intriguing enough to make them want to listen to or read the entirety of what Ben Guess or Jim Antal had to say, so they can learn more about the context of those quotes (texts and recordings are available at macucc.org/annualmeeting.)

What do you think?  Is tweeting from Conference events a worthwhile endeavor?  Were you at home or at the meeting, following along? If so, what did you take away from the experience?