The Israel-Palestine task force celebrates the leadership of our national officers for their call to respond to Christ's message of hope with justice and peace. Here is the pastoral letter...

"In those days a decree went out from Emperor Augustus … All went to their own towns to be registered... While Mary and Joseph were in Bethlehem, the time came for her to deliver her child."

Two millennia ago, Christ was born in Bethlehem. Jesus entered the world in this small Judean town because the occupying Roman Empire required everyone to register for a census. This forced Joseph, who traced his lineage to Bethlehem, to take Mary there to register. Today, Bethlehem is again under occupation.

Located on the West Bank of the Jordan River, Bethlehem currently has a population of about 50,000. It is surrounded by Israel's Separation Barrier, and by a number of illegal Israeli settlements. Occupied by Israel since the 1967 war, Bethlehem and the whole of the West Bank are cut off from Jerusalem, the center of Palestinian economic life. The effects of the occupation include continued land grabs, restrictions on Palestinian freedom of movement, and the expansion of Jewish-only settlements on Palestinian territory. These and other impacts pose real challenges to the daily lives of West Bank Palestinians—both Christian and Muslim. 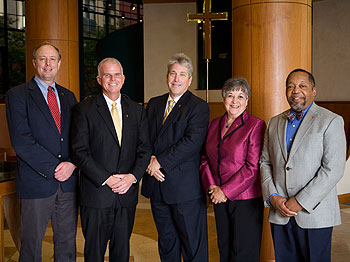 A half million Israeli settlers now live in the West Bank and Palestinian East Jerusalem. This violates international law which prohibits relocation of an occupier's population to occupied land—land not considered part of its sovereign territory. Since 1967, and especially since the mid-1980s, Israel has built settlement communities in the West Bank at an ever-increasing rate. In early November of this year, Prime Minister Netanyahu announced plans to construct 1,200 new settlement homes.

Not only are settlements places of residence for Israelis (but not for Palestinians), some are centers of industry. A number of companies operate in settlements. Some of these companies' products are available in retail stores in the US and around the world.

As he came near and saw the city [of Jerusalem], he wept over it, saying, 'If you, even you, had only recognized on this day the things that make for peace! But now they are hidden from your eyes…Then he entered the temple and began to drive out those who were selling things there…

The United Church of Christ has consistently been a voice for justice and peace, in the US and around the world. In response to the voices of our Palestinian Christian partners, we have advocated for a just and peaceful resolution to the Israeli-Palestinian conflict, one that guarantees the security and sovereignty of both Israelis and Palestinians. We have condemned violence in all its forms. We yearn for a day when all Israelis and Palestinians—Jews, Christians, and Muslims alike—can enjoy the fullness of life in this troubled place.

In this season of gift giving we should, as responsible Christians, avoid purchasing gifts and products that contribute to the continued violation of human rights and that diminish the possibility of peace, especially at the birthplace of the Prince of Peace. We therefore ask you to make conscious decisions not to buy products which contribute to the denial of people's rights to livelihood, land, and property. We suggest that you avoid purchasing items such as:

For an extensive list of companies that profit from the occupation, you may wish to visit the website, Who Profits? The Israeli Occupation Industry.

In that region there were shepherds living in the fields, keeping watch over their flock by night. Then an angel of the Lord stood before them, and the glory of the Lord shone around them, and they were terrified. But the angel said to them, 'Do not be afraid; for see—I am bringing you good news of great joy for all the people: to you is born this day in the city of David a Savior, who is the Messiah, the Lord...'And suddenly there was with the angel a multitude of the heavenly host, praising God and saying, 'Glory to God in the highest heaven, and on earth peace among those whom God favors!'

We can give alternative gifts that will make a positive impact on people's lives. Bethlehem's neighboring town of Beit Sahour is also known as "Shepherds' Field," for it was there that the angel appeared to the shepherds. Today, Beit Sahour is home to a UCC partner, the Shepherds' Field YMCA and the Y's Joint Advocacy Initiative (the JAI). One of the JAI's programs is the Keep Hope Alive olive tree-planting program. Keep Hope Alive offers people the chance to sponsor the planting and replanting of olive trees in areas that have been uprooted or destroyed in the West Bank by the occupation. It seeks to plant 8,000 trees each year. Over 80,000 have been planted since 2005.

This Christmas, we encourage you to consider giving a gift of the planting of olive tree. You can learn more about the program through the Global Ministries website.

Christ's birth brought and continues to bring hope to the world. In this season, let us respond to His message of justice and peace—a new world and a new era.

The Collegium of Officers of the United Church of Christ

The Rev. Geoffrey A. Black
General Minister and President

To read the letter on the UCC website, go here.