From the United Church of Christ 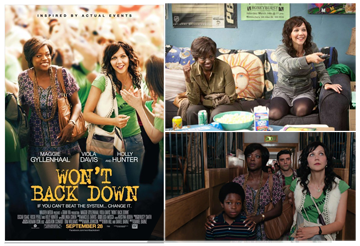 Won't Back Down, due out on September 28, is a fictional account—not a true story, of the operation of a school reform strategy called the parent trigger. Won't Back Down is produced by Walden Media, the same group that produced Waiting for Superman. Won't Back Down's subject is the "parent trigger,"a strategy being promoted by the pro-privatization organization, the American Legislative Exchange Council (ALEC) and an organization called Parent Revolution, which was launched by charter school operator Steve Barr with funding from the Bill & Melinda Gates Foundation, the Broad Foundation, the Walton Family Foundation, the Wasserman Foundation, Rockefeller Philanthropy Advisers and others. Parent Revolution is an example of what is known as an "astroturf" organization; it pretends to be a grassroots group of parents, but it has, in reality, no significant grassroots.

In California in 2010, the legislature passed "parent trigger" enabling legislation for parents to be able to seize a school by petition, replace staff, and turn operations over to a charter management organization. No real life example of a "parent trigger school" exists at this time. Parents tried a parent trigger petition at one school in Compton, California, but the charter school that was to have taken over the school instead founded a school at a nearby location. At another site, the parents' seizure of the school has been held up in a court action.