A new article in the United Church News focuses on the Congregational Church of Needham's many green initiatives. In recognition of its successful environmental ministry, the Needham church has been designated a Green Congregation by the Massachusetts Conference, UCC.  Read reporter Emily Mullins' story to learn more: 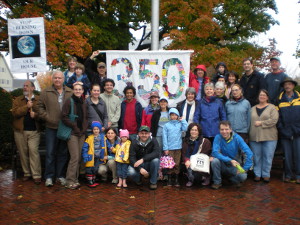 Deborah Baldwin and her Environmental Ministry Team have been busy. The members of the seven-person committee from the Congregational Church of Needham (Mass.) United Church of Christ have combined their passion for protecting the planet and have really started making some visible changes: like the more than six truckloads of insulation hauled onto the church grounds to make the building more energy efficient, arguably one of the most visible –– and memorable –– changes to date.

"I still wish I would have taken some pictures that day," Baldwin says, laughing. "It was a big project –– we put insulation everywhere we could."

Baldwin, a psychologist by day, developed a strong interest in environmental issues, particularly climate change, about four years ago when she began doing some serious reading and research. Around that same time, the church's outreach committee started doing more and more environmentally focused projects. The church council decided that environmental issues were important enough to receive their own committee and the Environmental Ministry Team (formerly the Green Church Task Force) was formed with Baldwin as the chair.

"I have grandchildren and I'm concerned about the world they will be living in 80 years from now," Baldwin said of her passion.

The team's mission is to make the church as environmentally friendly as possible and to promote awareness and habit change among its members –– and their long list of accomplishments runs the gamut. In addition to insulating the once drafty church, the group worked with the local utility company to conduct a professional energy audit of the building and change about 700 light bulbs to CFL versions, collected used cell phones to be recycled for soldiers in Iraq and Afghanistan, handed out packets of flower and lettuce seeds on Earth Day, and switched to chemical-free soap in the bathrooms.

They installed a bike rack and promote members to walk or bike to church through its "Roll and Stroll" program, and logged 1,400 walking and biking miles –– the highest number of any community group –– through the 2010 Needham in Motion project. The group hosts Climate Change Cafes, open to the community, two to three times a year where they show films or invite guest speakers to discuss current issues. The church is also a partner of the Green Needham 10% Energy Challenge, which challenges participants to reduce their carbon footprint by 10 percent, and currently have 45 families signed up. And the list just goes on and on.

Through its efforts, the team has been recognized as a "Green Congregation" by the Massachusetts Conference of the UCC. They have seen a 10-percent reduction in heating and cooling costs, and have stimulated discussions of future projects like installing solar panels and replacing the church's single-pane windows. But with such a broad mission, Baldwin notes the challenge of narrowing their scope to focus on real, achievable goals that people will want to be part of.

"What is challenging about environmental issues is that there are an infinite number of things you could do," Baldwin says. "And it is a tricky line to navigate to not hit people over the head with it, especially members who are up to their ears in stress and who may not have time to stop and think about doing an energy audit of their home or how they could use energy differently."

But the fact that more people even have energy use on their minds is progress that Baldwin is proud of. After all, awareness is the first step to change, and that is what the Environmental Ministry Team is trying to promote.

"One of our member's 10-year-old sons told me I was a good person when he saw I drove a hybrid," Baldwin said. "This is about helping the next generation and raising our children with the attitude that you turn out the light when you leave the room." 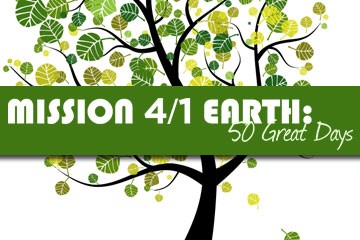 The United Church of Christ has been working for environmental justice for almost 30 years, and recognizes the opportunity for a shared mission campaign to live out our faith — in unity, as one church — for the sake of our fragile planet Earth.

With the help of UCC congregations everywhere, Mission 4/1 Earth –– an all-church initiative that begins April 1, 2013, and running through the 50 days of Easter –– hopes to accomplish more than 1 million hours of engaged earth care, 100,000 tree plantings across the globe, and 100,000 advocacy letters written and sent on environmental concerns.