Birds of Paradise: A Journey to Hebron

Birds of Paradise: A Journey to Hebron

We arrived in the offices of a new magazine named “Birds of Paradise” – loosely translated from the Arabic. It was mid-morning on a beautiful October day. Our group was small: all from the Boston area we were two United Church of Christ ministers, two Episcopalian lay women, and one Jewish woman. Our guide, who creates trips such as this two-week-intensive education tour, is an American Presbyterian who has devoted the greater part of the past dozen years to living in the West Bank. She knows people, has some facility in Arabic, and knows the culture. This is a great advantage for the traveler. Instead of the typical pre-packaged, superficial tourist experience, In His Steps: Pathways of Peace provided us with deeper experiences. We arrived in Hebron, having had been driven there from our hotel in Bethlehem. The journey took no more than a half hour and again I found myself surprised by the smallness of the West Bank.

We entered the second floor of a small office building on the outskirts and were greeted warmly, then ushered into a good-sized room that had been set up with chairs and sofas. We were seated and introduced to three or four female staffers along with their editor-in-chief, the only man on the staff. Conversation blossomed easily among all of us. Their command of English was impressive, and by this time – 5 days into our stay – we were familiar with local customs; we were not surprised when trays of refreshments arrived: water, juices, tiny and delicious cups of Arabic coffee spiced with cardamom and sugar. And then lunch: swarma, salad, hummus, fa 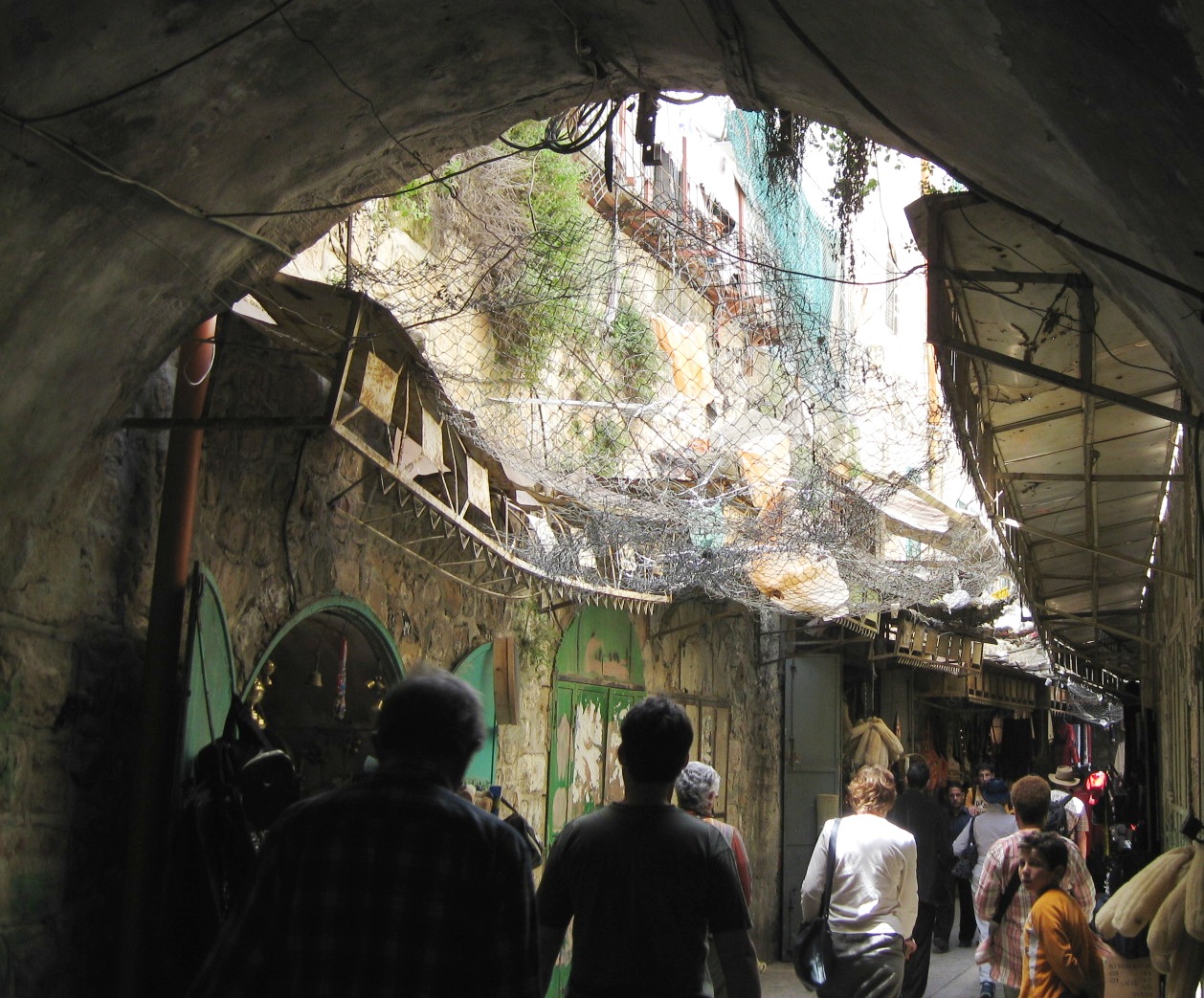 lafel, lubne – delicious and in abundance, standard hospitality. We learned about the magazine and were given copies of the most recent edition. We were asked about our trip, and there was special interest in our presentation to the Beit Fajjar Mosque of a letter of solidarity from the Massachusetts Conference of the UCC and a dozen other organizations and individuals who had signed on to our expression of care and sympathy for the burning and defacing of the mosque by “settlers” from a nearby colony of illegal Israelis. (See article in previous issue of Everflowing Streams)

After lunch we began the second part of our day in Hebron. With an escort of three women and a young man who made the point to bring up the rear, making sure we were all safe, we walked out to the street and began our tour through the Hebron souk to the Abrahami Mosque and Tomb of the Patriarchs in the city center. The source of concern for safety was not what most people imagine – that the West Bank is full of terrorist Arabs. The concern came from the fact that we were in company of Palestinians in a place that Israelis have colonized – an illegal action by an occupying country. The attitude of these so-called “settlers” has made life in Hebron miserable and contentious, establishing themselves all over the city. Some buildings have been acquired by Israelis by subterfuge and outright fraud, others by sheer intimidation. The result is that around 400 settlers now occupy dwellings all over the city, living on top of the shops and stalls of Palestinian businesses. The Israelis throw garbage from their windows so much that the Palestinian shopkeepers have resorted to hanging netting above all their stalls. Many streets and alleyways have been closed off by the Israeli Defense Forces which keep 2000 soldiers in the city for the sole purpose of protecting the illegal settlers. The IDF have closed many streets, preventing normal access from one place to another. On a previous trip Christian Peacemaking Teams showed us the circuitous route that a child in a wheelchair was forced to make to his school each day because of the street closure by his house.

As we walked through the souk we could see clearly the economic depression. It is more profound here than in other areas in the West Bank, which generally struggles due to the Israeli restrictions, tariffs, and simply the lack of tourism. Our hosts told us that because being in the streets here is so difficult due to the threats and attacks by Israelis, that they avoid everything but the most necessary shopping excursions; thus, the shops selling decorative items, pottery and even clothing are often forced to close for lack of business.

As far as who needs protection, it is hard to discover any information indicating that the illegal settlers do. All reports from Christian Peacemaking Teams and other international accompaniers as well as Israel’s premier human rights organization, B’tselem, decry the harassment that is commonly meted out by settlers to the indigenous population.

As we passed one alleyway, our hosts suggested going down to a home at the far end. The narrow area with closed and shuttered windows, the light filtering down from a blue sky, and the eerie sense of abandoned life was intriguing. As we walked we casually snapped photos until a threatening voice out of nowhere said, “No pictures! No pictures!” The source was Israeli soldiers positioned on rooftops and in windows with their guns pointing ominously in our direction. At the end of the alley our hosts led us up an ancient outside staircase into a stone apartment on the second floor. This was the home of a 5-yr-old boy who had been attacked by settlers when he was outside playing: they had thrown a toxic liquid into the child’s face, blinding him. Inside the home we were introduced to the parents of the boy and greeted with a reserved, watchful friendliness. They have several young children who all sleep in one room. We were shown their bed which had above it a 3 or 4 inch round hole, a window onto the sky. However, settlers are able to creep over the rooftops and outside staircases, and one night had come to the roof just above the small window; from there they put a poisonous asp into the window. In the morning the father found the snake on the bed with his sleeping children, but, (as he told us, Allah be praised) it had not bitten them. He had killed it, and showed it to us. They also explained that they were very fortunate in the matter of their blinded son: international medical people had taken him to Jordan for an operation. All of this story was known to and had been documented by the news magazine. Their poverty and depression were palpable. They showed us a few small hand made things they were selling, and several of us gladly bought something.

In the city square we were directed to observe that the main street – as wide as a one lane road – was designated for Israelis only. If you are of the indigenous Palestinian population your travel is limited to a narrow sidewalk along the edge. Not bad for walking perhaps, but what if you have a cart or a donkey? Or what if you object to being treated as a second class citizen, or worse?

There is no recourse for Palestinians. Everything we observed further confirmed the opinion, expressed by Jimmy Carter and Desmond Tutu among others, that Israel has instituted an apartheid state. The roads are separate. The wall is not a security barrier for it is open in many places, and it does not follow the line of demarcation between the two potential states. Instead it wanders around inside Palestinian territory, gobbling up (under the guise of “security” land and homes that have been built by and dwelt in by Palestinians for generations. Nonsensical checkpoint between one West Bank town and the next make for outrageously slow travel. The constant uncertainty for Palestinians is an obvious form of harassment: whether a person one can even get to their own farmlands, olives, relatives, places of employment or even hospital is entirely in the hands of a hostile occupier. In it’s service, there are two systems of justice. If an Israeli or an international is picked up at a demonstration, they are taken to Israeli civil court and released in a perfunctory manner. If a Palestinian is picked up at the same demonstration that person is taken to an Israeli military court, and is very likely to be placed in administrative detention, which means simply that he is kept for as long as Israeli officials choose, without charge, proceedings or counsel. Yes, Virginia, it is apartheid, and the more shocking because it has been instituted in “the only democracy in the Middle East,” as Israel’s propaganda and U. S. media claim.

Is there hope? Visit and see for yourself the many venues of hope. The news magazine Hebron is one sign of hopeful, loving and generous people, working hard and producing a beautiful magazine – whose name in Arabic I dare not write here in case I should compromise them by doing so. Call me paranoid, but when I took pains to remove the microchip from my camera and hide it separately in my checked luggage before the return flight, I thought that that was a bit paranoid too. However, both the camera and the chip were confiscated in Ben Gurion Airport. Was it because it was my second trip in 2 years? Who knows?

If you are interested in unconventional travel or simply want to check out the organization that the Israel-Palestine Task Team of the Massachusetts Conference Mission and Justice Commission has designated as its partner for travel, go to www.ihsholyland.org.  Among other things there you will find more about medical teams and future trips currently being planned. Or respond to the conference office with questions/comments for me.

The Rev. Rev. Branwen L. Cook is Chair of the Massachusetts Conference Israel-Palestine Task Team and Pastor of the Roslindale Congregational Church, UCC.