The following is an account of her journey to Israel Palestine by MACUCC Pastor Branwen L. Cook.

The village of Beit Fajjar lies a few miles south of Bethlehem, nestled into the hilly, rugged beauty of the West Bank – a part of the area that was designated in 1948 to remain as a future state for Palestinians, many of whom have lived there for countless generations.  In the small hours before dawn on October 4, 2010, the mosque in Beit Fajjar was attacked. Under cover of darkness, according to a report in the Christian Science Monitor (10/4/10), a group broke into the mosque -– apparently from one of the Israeli settlements nearby which have been built on illegal areas belonging to Palestinians. According to the report, these settlers were apprehended by Israeli Defense Forces, but instead of arresting the culprits, they were chased away.

The following day, the IDF publicly stated they were committed to finding those who had done the damage.
Perhaps more genuine was the delegation of five rabbis who arrived the following day to apologize. Certainly the ceremonial acknowledgement of wrong-doing -- reported by US National Public Radio -- and the gift of Qur’ans the rabbis brought to replace the ones that had been burned were welcomed by the leaders of the mosque.

When I heard about these events, I was in the final stages of preparation for a two-week pilgrimage to the Holy Land with a small delegation seeking to learn more about the situation and to bring a message of peace and reconciliation. We were five women from Boston: two Congregational United Church of Christ pastors, two Episcopal laywomen, and one Jewish woman who calls herself secular but spiritual. Our trip was planned by a Presbyterian woman who has spent the greater part of the past dozen years in the West Bank and Israel, and has founded an organization for education and peacemaking called In His Steps: Pathways of Peace. 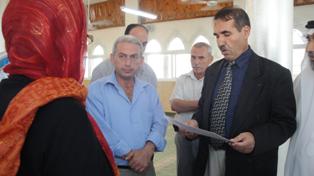 I responded to the sad news about the mosque in Beit Fajjar with particular empathy because of the relationship In His Steps has developed with that community, especially with its budding organization “The Student Forum.” I immediately contacted Conference Minister Rev. Jim Antal and Associate Conference Minister Rev. Peter Wells to describe the burning and defacing of the mosque, and to explain that my group would be there shortly, in Beit Fajjar. I requested a letter of solidarity and support and it was agreed almost immediately. (The text appears below)
The Conference staff acted quickly and I soon had a PDF to distribute electronically, which netted a number of supporters who asked to have their names and/or organizations listed. This group included Interfaith Witness for Peace, Washington, D.C. Interfaith Alliance for Middle East Peace, Shomer Shalom Network for Jewish Nonviolence, Presbyterian Peace Fellowship, Common Ground in America for Peace in the Middle East, and Friends of Tent of Nations – to name some of those listed. I was able to pick up a hard copy of the letter as well, to bring with me on the trip.

On Thursday, Oct 22, our delegation arrived in front of the mosque and emerged from our vehicle. Each of us was suitably covered, including our heads. We expected that Beit Fajjar, like small towns in the US, is conservative and somewhat sheltered. I had been to the town on my previous trip, but not to the mosque. As I stepped onto the dusty street in the heat of the day, wearing my clerical collar as the designated spokesperson for our group, I was nervous. There was a small crowd to greet us: leaders with whom Christy Reiners of In His Steps spoke briefly in Arabic. Those to whom I was introduced I greeted with appropriate salutations from my miniscule Arabic vocabulary. We walked up a few steps, removed our shoes and entered the mosque with a delegation of men numbering 20 or so. I was particularly aware that under normal circumstances, women and men do not congregate at the same time within the mosque, nor mingle for worship or discussion. Yet these men seemed both at ease with us and deeply respectful of what they understood our mission to be.

A translator introduced himself, and then he introduced the dignitaries: the leaders of the mosque, including the Imam, as well as the Imam from the regional council stood with us at the back of the mosque.
I was invited to speak to the leaders and I described our purpose there: our concern, our caring, and a few sentences from the letter itself, as well as explaining that others beyond the United Church of Christ had wanted to be included in 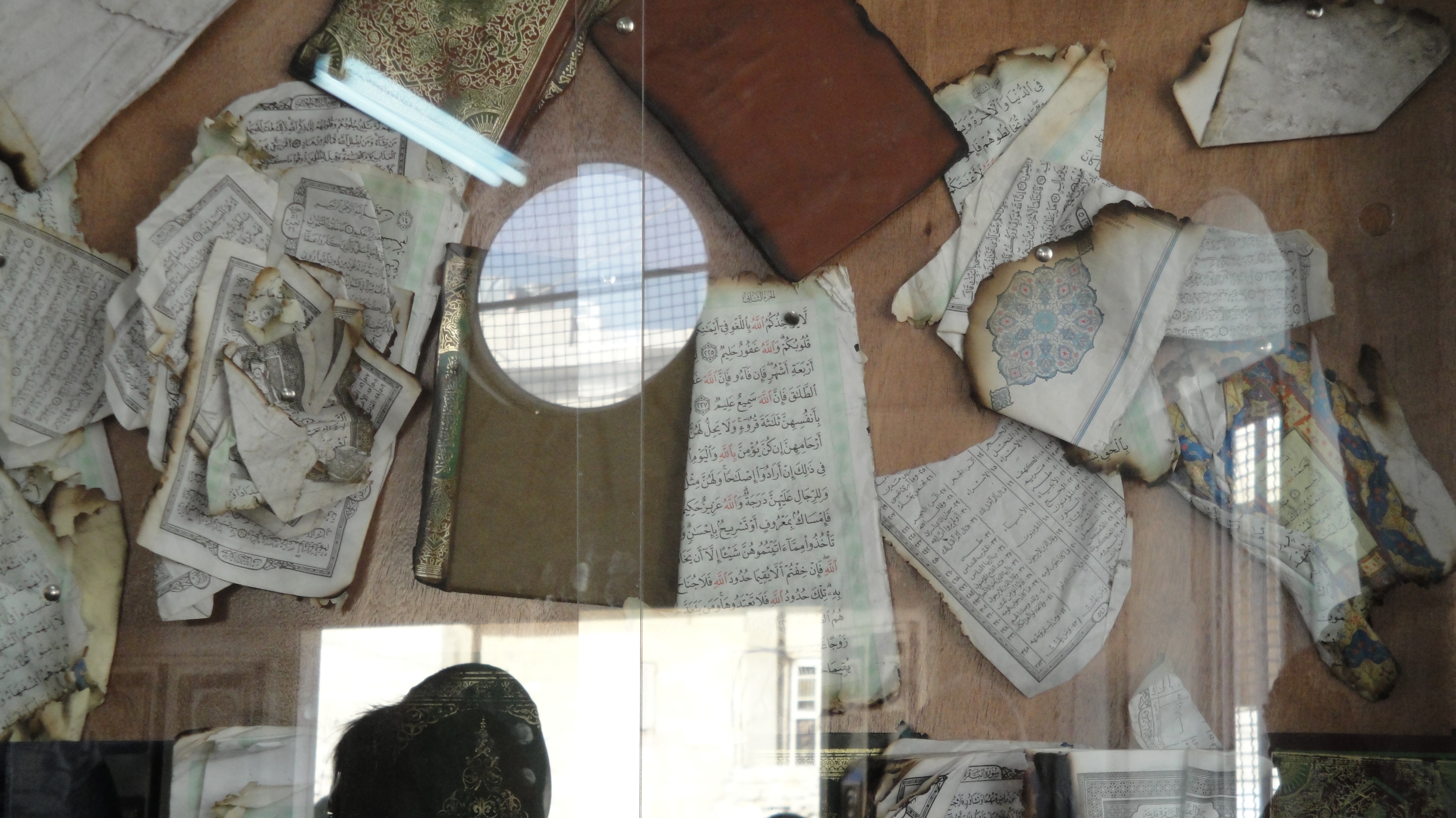 There was a good deal of friendly but serious nodding; then a case on the wall was pointed out to us. Beneath the glass were the remains of a number of Qur’ans. We looked and asked permission to photograph. Given it, we took pictures including the leaders with the sad evidence of hatred and destruction beside them.

We were told that the entire carpet as well as decorative interior columns had been replaced because they had been so badly burned. One very elderly man began to speak to us, showing us his still reddened eyes. He had apparently seen the blaze and crept into the building despite the danger to himself in order to be there in the sacred space as it met a terrible fate.

Perhaps the most startling thing we learned was that they had repaired everything in three days.

Click here to view the letter from the Massachusetts Conference of the United Church of Christ which was delivered to the mosque leaders. Additional signatories included Interfaith Witness for Peace, Washington, D.C. Interfaith Alliance for Middle East Peace, Shomer Shalom Network for Jewish Nonviolence, Presbyterian Peace Fellowship, Common Ground in America for Peace in the Middle East, and Friends of Tent of Nations – as well as a number of individuals.

The Rev. Rev. Branwen L. Cook is Chair of the Massachusetts Conference Israel-Palestine Task Team and Pastor of the Roslindale Congregational Church, UCC.