March for Justice in Boston: Answering the Call

March for Justice in Boston: Answering the Call

To see 40,000 people gathered in Boston to counter-protest 30 or 40 Neo-Nazis and White Supremacists was remarkable. Even if some of our political leaders refused to call the heinous acts of Charlottesville domestic terrorism and truly condemn them, 40,000 people in Boston were ready to demonstrate their beliefs.  A message was sent: Our country has come too far and made too many strides in the right direction to let an aberration deter us. I was reminded of that old Negro spiritual that said, “Ain’t Gonna Let Nobody Turn Me ‘Round, Turn Me ‘Round, Turn Me Round...” 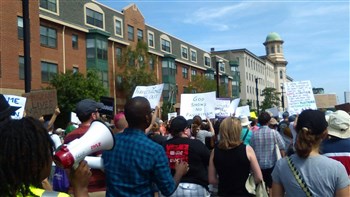 During the protest, we shouted and sang and marched a long way to fight the racist anomalies of our country.  People united - all races, ethnicities, gender identities, nationalities, and religions - and denounced the notion that racism and Anti-Semitism is acceptable. Everyone who showed up that day understood the potential for danger. They were willing to put themselves at risk to stand up for what they believed; and that is the America that I know and love.
On the Sunday following the protests, I participated in a panel discussion at Old South Church in Boston with UCC General Minister & President Rev. John Dorhauer, and Samer Naseredden of the Islamic Society of Boston. We were asked a couple of dozen questions over the 90-minute period. However, one question stood out to me. Someone asked, “What can we do to help people of color? I’m only one person.”  It took a lot of courage to ask this question, a question that several people in the room or outside might have been wondering about as well. Once the 40,000 people who gathered in Boston returned home after their long day’s walk, there was a heightened sense of oneness, and possibly this thought: “What can I do now?”
The racism and hatred and bigotry that has manifested itself in America did not happen overnight. The racism we experience today was ingrained during America’s founding, and has been hundreds of years in the making. We will not be able to overcome racism in one night, but I do ask you to evaluate how you can personally make a difference. Can you volunteer at a local YMCA or Boys & Girls Club to mentor students who might not have a positive role model? Can you tutor students of color to work toward reducing the academic achievement gap? Can you help a family where one member might be facing deportation?

Someone told me privately at the march, “TJ, I feel that I am trying to do good and get rid of racism in America, but my work is just a drop in the ocean.”  And to that I ask, “What is an ocean but a multitude of drops?” (thanks to David Mitchell).  We do not all have the same call to serve, but we do each have a call.

TJ Harper is Racial Justice Associate for the Massachusetts and Connecticut Conferences.
Photo by Estelle Minister

TJ Harper is Associate for Racial Justice for the Massachusetts Conference, United Church of Christ.