8/15/2017 - by: Kelly Gallagher - Justice and Witness
Share
I was at Charlottesville. Something tells me this will be a phrase that will be a part of the rest of my life.

Congregate called on clergy to come and stand with them in Charlottesville, to bring Jesus’ Gospel of love to that place, knowing full well that it would be dangerous. Indeed, we were encouraged to record our statement of why we came and share it with a loved one, “in case the worst happened.”

It became our role as clergy throughout the day to go into the fray. We had been trained the day before how to stand in the face of violence, how to protect our body and the bodies of others from violence, how to hold the line. After our training, we joined hundreds at a worship and prayer service with Rev. Traci Blackmon and Dr. Cornell West who reminded us that love wins over evil. (Link to Rev. Blackmon’s sermon here.)

We started early Saturday morning as we walked silently from First Baptist Church to Emancipation Park after our sunrise worship, again with Dr. Cornell West and Rev. Traci Blackmon. We lined up face to face with the white nationalist militia, only a sidewalk between us. At first glance one might think they were the National Guard as they were heavily armed with automatic weapons, guns and knives. The patches they wore on their camouflage belied their allegiance.

We lined up and began to pray. We prayed for love. We prayed for the hearts of all those present. We prayed that hatred and violence would cease, and we prayed for the strength to stand in the name of love throughout the day. As the hate groups began to arrive, group by group, they would file down the sidewalk between our line of clergy and the line of militia, hitting us with their flags, insults and spit. Their racist, anti-Semitic, queer-phobic rhetoric flowed so easily from their hearts. In response, we sang. We sang “This Little Light of Mine,” “Over My Head” and “Oh Freedom” – led by our leader the Rev. Osagyefo Sekou who trained us, walked beside us, and led us in song and prayer.  We chanted “Love Has Already Won” over and over. And as the people of Charlottesville gathered behind us they began to sing and chant as well. With that song and prayer and words of love surrounding that space, I could look upon the young white supremacists before me in a new light. There was no hate in my heart and I was grateful.

There are those who are seeking to boil the violence down to two sets of radical groups. This is not the case. While there were those protesting the White Supremacists who were not committed to non-violence, the violence began when one of the hate groups intentionally plowed through the group of clergy as we stood on the steps of the park. There were many ways around us – we were a small, unarmed group and they had guns, shields and sticks. But they chose intentionally to climb the steps and push through our group. This was without provocation and without thought to another way. Other groups moved forward to protect us before that could happen again. 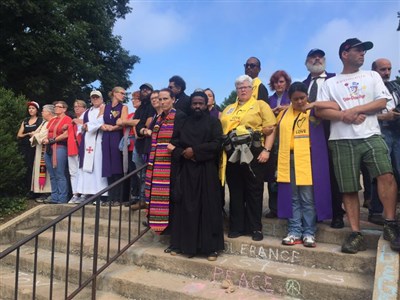 As the day went on we were called to different points of conflict. There was a moment when we were traveling down the street toward a conflict and people on the street stepped to the side and began to applaud. We heard “thank you” and “bless you” as we headed into the fray. We waded into a crowd exchanging words and some blows, standing between the groups, inviting the white nationalists to keep moving.

We were at our gathering place – a local coffee shop that had opened for the day to allow the clergy and faith group to rest – when we got word of the attack. We ran the two blocks down the hill, arriving before many of the police and paramedics. A few of us were able to get inside the police line before it was cordoned off and be a presence for the victims and the witnesses. I found myself hearing over and over eye witness accounts of how a car accelerated into a group on the street, plowing into another car, and reversing out again before speeding off. I watched as paramedics arrived and worked on victims, as others waited in the sun with broken legs and dislocated shoulders, because there weren’t enough personnel to go around. The volunteer medics who were there - as we were - to engage the fray and bring healing as much as possible, were the first on the scene. One wept as she told me of a person who she was pretty sure had a fractured skull and wouldn’t wait for the ambulance. I held another young woman as she tried to put her shoulder back in place, not willing to go to the hospital because she didn’t have insurance.

It wasn’t until the next morning in church that many of us began to feel the impact of that day. As Brittany Caine-Conley, a member in discernment for ordination at Sojourner United Church of Christ in Charlottesville and one of the founding organizers of Congregate CVille, began to preach and reflect on the day before, I began to weep. I wept for the exhaustion I felt, for my partner so far away who waited by her phone all day for texts to know I was still alive, for the hatred that permeates the hearts of so many in our country, for the system of evil that is white supremacy that seeks to end the love of all of God’s children, for the fear in the hearts of people on every side.

Brittany ended by sharing the words she offered on Friday night at our worship service as she called us to the altar for a blessing. She said that she felt called to put her body in a place where it could absorb some of the hate and violence so that black and brown bodies didn’t have to, because they have been absorbing the violence for so long. That is what Jesus did, she said. He absorbed the hate and evil of the world – and gave back love.

If ever there was a time for Christians – particularly white Christians - to enter the fray, it is now. The wave of white supremacy will keep coming as the push against it gets stronger. Let us stand before it with love, claiming in the name of Jesus our call to love our neighbor as ourselves. While some who claim Christ as Lord spew hatred and embrace violence to advance their cause, let us be the Christians who are known by our love.  Photo from UCC.org

Read a sermon by Chip Hurd, member of the Racial Justice Task Team of the MACUCC
Clergy are invited to submit their own sermons related to this topic: methotk@macucc.org

Read statement from the Mass Council of Churches