At the end of most worship services at Covenant, I tend to stand with other worship leaders at the back of the sanctuary while Tom unfurls another spirited postlude on the Welte-Tripp. And most often I find myself standing with my hands behind my back, stole dangling in front, lovingly looking over the gathered community and giving thanks. This past week on May 25, I stood also with my hands behind my back and stole dangling in front, lovingly looking out over a beloved community and giving thanks. This time, my hands were in cuffs as I was being arrested for trespassing and "disturbing the peace." In place of the organ rose the voices of many fellow arrestees and people of faith ("keepers of the peace?") signing out "the tide is rising, and so are we!" and "we are sitting in the light of God!" as deeply respectful Boston Police officers loaded us into windowless vans. As far as we can tell, this was the largest act of civil disobedience of interfaith clergy on behalf of climate justice in Boston's history, as 16 of us sat with our feet dangling over a 12-foot deep trench being dug for a fracked-gas pipeline that no one wants. Local West Roxbury residents don't want this dangerously extra-high pressure pipeline running by their front doors and playgrounds. Boston officials including our city's mayor are against this project. And science is clear the earth does not want this, as natural gas from fracking is not a sustainable solution as it leads to significant methane gas leakage that only exacerbates climate change. As our Mass. Conference UCC General Minister Rev. Dr. Jim Antal - who I was proud to sit next to in our action - prophetically put it, "This pipeline is a lie! The Boston area - indeed the world - doesn't need this additional fossil fuel." (Read related story here.) 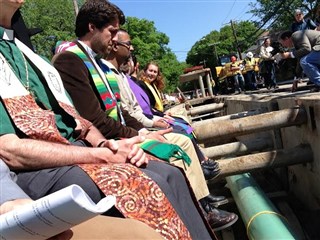 While I have been a part of many rallies and protests for justice over the years inspired by my faith in a Jesus who is known for having disrupted unjust structures, this gathering was unique as we called it an Interfaith Prayer Service for Climate Justice. We held prayer booklets. Guitars and ukulele strumming led our chants. We held hands in prayer. A Torah scroll was unraveled and prophetic words from Deuteronomy about the dangers of abusing our earth were shared. As we crossed under do-not-cross-lines and sat down, we began our service with some heartfelt prayers for the Spectra Energy pipeline workers and their families that there would be more and more opportunities for them to use their skills on projects that are focused on renewable energy that still provide them meaning and income. And we prayed for the police who serve our communities (and who would soon arrest us with such care and professionalism). And we all experienced the Spirit's presence among us in a powerful way.

"This is where we are called to be." The 16 of us who sat down, and the 70 or so other faithful supporters encircling us, sang out some inspiring spirituals and songs, including the one by our friend Rabbi Shoshana Meira Friedman of Brookline's Temple Sinai, that we as a church sang together this past Climate-Changes-Everything-God-is-With-Us Advent.

The experience overall was inspiring and humbling. It was clear that we were not doing this work alone. While our group was the largest arrested so far, we join in a total of some 85 people who have been arrested at this site alone in West Roxbury (including bravely prophetic local resident in her 80's Mary Boyle who vigils in protest daily), not to mention the thousands who have been and are getting arrested around our world for climate justice in recent months and years. Despite the very low media attention on the overwhelming opposition to this pipeline, there is a significant movement for justice afoot in our community, and people of faith are playing a significant role. http://www.climatedisobedience.org/ 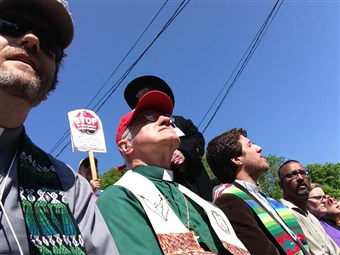 It has become clear to me that striving to follow after Jesus is an embodied calling. And there are times when our conscience calls us to put our Christ-following/ Christ-carrying bodies on the line for what is right. And for me, this prayerful, peaceful protest was precisely one of those times. Projects that threaten both local communities and our global climate for the sake of profit, are not just, and need to be opposed. Not only my faith, but my vocation as clergy calls me to take such actions. That Wednesday morning I was letting my collar & stole do their intended jobs - to be symbols of our faith in Christ to the wider world on literal streets - symbols of our faith in a God of love for all communities, all neighbors, all of creation. And I knew deeply that you, the community of Covenant, would be supportive of my action. As we sat in front of front-loading diggers that I couldn't help smile deeply at thinking my son Rowen (on behalf of whom I acted that day) would love to see these "diggers!" - we each had a chance to share a brief statement of why we were there in prayerful protest. And I found these thoughts and words emerge: "I am humbled to be here as a pastor at Church of the Covenant in Boston, and I am here because of my faith. My faith in Jesus who refocuses us on the simple command of God to love our neighbor. Our neighbors are here in West Roxbury, our neighbors are sitting behind these diggers, our neighbors are policing this protest, and our neighbors are the poor around the world suffering most from climate change." I then led us in an earthy-Celtic benediction written by J. Phillip Newell that ends with, "Bless to us O God, the moon that is above us, the earth that is beneath us, the friends that are around us, your image deep within us, the rest which is before us. AMEN." 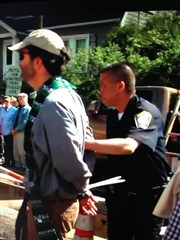 The "rest" that was before us that morning included a ride in a police van, and time in a holding cell. In both places we were prayerful and mindful of all those who do not "choose" to get arrested and who are not treated as well by authorities because of societal location, race, or immigration status. In both places we also found ourselves singing spirituals and gathering strength and inspiration from each other.

The "rest" that is before us as a congregation and as people of faith is that wild, risky, beautiful, peaceful mix of prayer, singing and action for wholeness in our world, as together we seek and strive to follow after that ever loving, love-of-neighbor-inspiring, table-turning Rabbi Jesus. May we all be together with hands behind us in prayer and deep hope in this journey.

In peace,
Rob
P.S. - the very week before this action, our church's courageous Caitlin Vest and Christine James inspired me as they took part in a very large act of mass civil disobedience in Albany as they put their bodies on the line blocking a fossil fuel train as part of 350.org's Break Free wave of global action for climate justice: https://breakfree2016.org/ 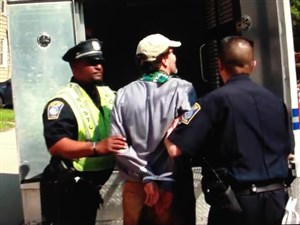 Additional Coverage on this civil disobedience:

Rev. Rob Mark is pastor of Church of the Covenant in Boston.