Are We Over the Rainbow Yet?

Are We Over the Rainbow Yet?

A little after 10 AM Eastern time, there was a low bustle in the Cleveland Convention Center hallway.  People were slowly gathering for the first day of Synod, registering, looking for directions.  There came a low stir of comments, then squeals, seemingly every 15-20 seconds or so, then individuals talking loudly, then shouting and crying.  People shouted, “It’s YES!”  No need to explain that it meant the Supreme Court had ruled in favor of marriage equality. The news made its way around the Synod gathering and affected everything else that happened that weekend.

The decision technically ruled on the description of marriage parameters in four states (Ohio, Kentucky, Tennessee and Michigan) but had nationwide implications. And the rest, as they say, is history. 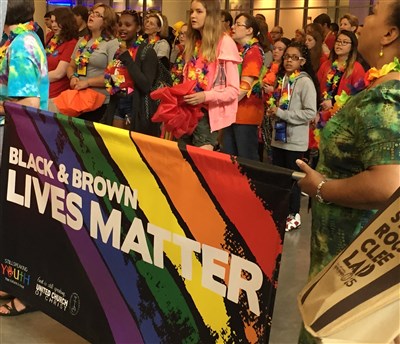 The stars aligned, as many had hoped they would, and thousands were gathered in Cleveland at the 30th General Synod when the decision came. The stars aligned in Cleveland in other ways. The Open and Affirming Coalition had just held their National ONA Gathering, celebrating the 30th anniversary of the national Open and Affirming Program (as we did here in Massachusetts last year).  Counting on the poetic moment and the inevitability of their cause, many pro-marriage equality clergy prepared to offer weddings on whatever day the decision was rendered. Many out-of-state clergy also arranged local licenses to be able to officiate as well.

Even as the Supreme Court glow was evident, it was also evident that many people see no good news in their lives and in their communities.  Prayers were said for “Mother Emmanuel” Church in Charleston and the recently martyred people there. Youth and allies marched through Synod with a “Black and Brown Lives Matters” banner, chanting that our ministry reaches far beyond one group or cause.

A seminary offered buttons that read “If you think racism doesn’t exist, you’re white.”  They all reminded us that our mission is to cause trouble in Jesus’ name and tell the stories.

The Synod body adopted a resolution to work against Religious Exemption laws, which have recently passed in several states and which limit LGBTQ people’s access to services, employment and places to live.

Transgender people are trying to live their truth and are still finding that they have not been swept along in the tide of rights. In every part of the country, transgender people have their lives ended by hate and misunderstanding.  Some, seeing no improvement or hope, take their own lives.

It is surely appropriate to celebrate the good news of marriage rights for anyone who wants to marry. But the energy from this needs to go directly forward into insuring that, in every way — spiritually, legally and socially — everyone has their place in the Body of Christ.

Kathie Carpenter is the Massachusetts Conference ONA Ministry Team Chair, and ONA consultant for the Open and Affirming Coalition of the United Church of Christ.