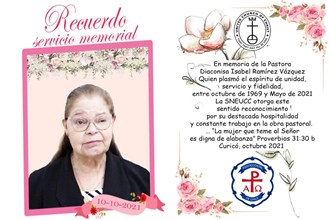 For more than 30 years, the historic Massachusetts Conference and the Pentecostal Church of Chile have walked together in an ecumenical partnership and many cross-cultural friendships have formed as a result of partnership activities. Some of these friendships involve deep care and concern for sisters and brothers on the other side of the globe.

Recently, members of the partnership, now under the auspices of the Southern New England Conference, were called to demonstrate our love and support in a time of loss.

In mid-May, we learned of the death of a leader of the Pentecostal Church of Chile, an individual who met many delegations from Massachusetts, often extending hospitality in her own home. Known in the church as Pastora Diaconesa, Isabel Ramirez Vazquez passed away on May 13. She was the wife of Bishop Emeritus Ulises Muñoz, a leader whose vision propelled our ecumenical partnership. His wife was also his partner in ministry in every way possible. Pastora Isabel had suffered from poor health for some time and her family expressed relief that she was no longer suffering. 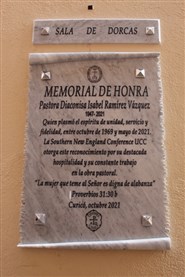 Over the years, many of us got to know her and her deep love for the church, her care for her family, and her love of flowers and dolls. Personally, I am grateful for the hospitality that she showed me during a sabbatical in Chile during which time she made sure that I was well-fed—usually with four meals a day! Chile partnership participants wanted to do something to honor her life and to express our support for her family. In conversation with our Chilean partners, we agreed to commission a marble plaque that would dedicate a room of the cathedral church to the use of the women’s ministry.

While we were in the process of planning this memorial, we learned of the death of Abraham Muñoz Ramirez in early September. He was the eldest son of Ulises and Isabel and had also been sick for several months. But his death, so soon after the death of his mother, caused great sorrow for the Muñoz-Ramírez family, a grief that many of us felt from a distance.

On Sunday, October 10, the Pentecostal Church of Chile hosted a special service to dedicate the plaque and to offer prayers of support for Bishop Emeritus Munoz and his family. In Massachusetts, many of us were able to participate on zoom. The service was very moving, even with the language barrier. The granddaughter of Ulises and Isabel read scripture, former Chilean missionary Elena Huegel offered words of remembrance, Chilean translator Keyla Ramírez sang two gospel hymns in English and Spanish, the Rev. James D. Ross II (SNEUCC Minister for DEI) and I offered words of support from the Southern New England Conference. During the service, the family unveiled the plaque that reads:

The service was broadcast live inside the cathedral church in Curicó and across the church’s Facebook page. The scripture tells us to, “Rejoice with those who rejoice, weep with those who weep” (Romans 12:15).  With our friends in the Pentecostal Church of Chile, we have had many occasions to celebrate and to grieve. Despite the distance between us and the differences in our language and culture, we continue to walk together in mutual care and concern.

Christopher Ney is chair of the Chile Partnership Committee of the SNEUCC and Pastor of the Central Congregational Church (Newburyport).  He is seen here with Bishop Ulises Munoz, former President of the Pentecostal Church of Chile.