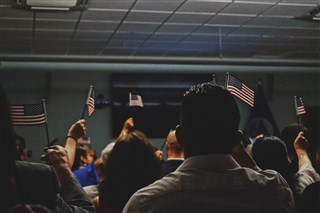 Millions of Americans who came to the United States as children, including many whose only memories are of life in this country, are again uncertain whether they will be able to stay here after a federal judge in Texas ruled that the Deferred Action for Childhood Arrivals is illegal.

I was attending General Synod 33 online when the ruling came on Friday. Had we been meeting in person, I would have gathered with friends and colleagues to lament and talk. Instead, I said a silent prayer for those impacted by this news and reflected on the ways in which so many communities of color and members of other minoritized groups are fighting daily for their very survival.

In times such as these, I am especially grateful for the church -- and the Southern New England Conference of the United Church of Christ, in particular. I am thankful for our commitment to working for justice and for my belief in God’s enduring presence. I am grateful to know a Jesus who journeys with us in our times of difficulty as much as in our times of joy.

Alongside the hope that comes in Christ, I believe we must celebrate that many congregations are already working to address these issues. I look forward to our continued work together as well as the new shared efforts we will undertake. As always, I am eager to hear your ideas and to identify opportunities for collaboration.

The policy allows some individuals brought to the United States as children to apply for and receive a renewable two-year period of deferred action from deportation. DACA recipients are eligible for work permits.

Obama sought to expand the program but was not successful. Four years ago, the Trump administration announced plans to phase out the program. Court orders blocked this action. Congress has discussed but not passed comprehensive immigration reform.

Last week’s ruling would bar future applications to DACA. It does not immediately cancel existing DACA permits, but it leaves recipients worried about that possibility – and about what will happen when it is time for their renewal applications.

Imagine the devastation wrought by such uncertainty! President Biden has said the U.S. Department of Homeland Security will challenge the ruling.

In the meantime, our work and prayers must continue – regarding this and far more. And may we be strengthened by the words credited to the Prophet Isaiah, “So do not fear, for I am with you; do not be dismayed, for I am your God. I will strengthen you and help you; I will uphold you with my righteous right hand.” (Isaiah 41:10)