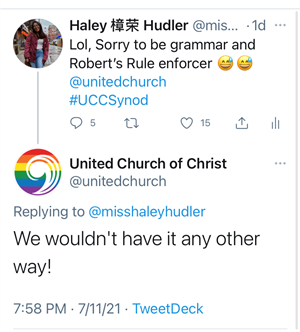 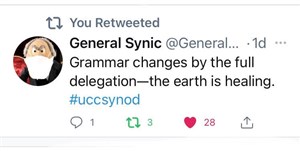 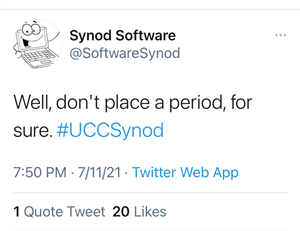 July 13th
On Sunday the 11th, the delegates had a long day! Our first plenary was exciting, a bit boring, funny at times, and well put together for us to be together on this online space. I feel one of the ways I felt most connected to follow UCC'ers was through social media on Twitter. We were led in a powerful opening worship where we were welcomed to answer questions with our platforms with the hashtag of #UCCSynod. Myself along with other delegates were LIVE tweeting during the worship and plenaries and it was very fun to crack jokes with each other.

During the first plenary, I brought up a motion, well an amendment, to add a comma between two names of the black men in the Resolution to Recognize the United Nations International Decade for People of African Descent (2015-2024). Luckily there were no oppositions to this amendment and through conversations on twitter, I found my motion made people smile. See some of the tweets (at right)!

July 14th
I also attended some optional workshops, including Pacific Islander and Asian American Ministries (PAAM) and Join the Movement for Racial Justice.

As an Asian American delegate from New England, it was very refreshing to see people on Zoom that look like me. Unfortunately there is not a large population of Asian American Pacific Islanders in New England and I did not grow up surrounded by others like me. During the PAAM workshop, I listened to the history of how it started (in the 70s) and some of the major achievements PAAM has done over the past couple of decades. It was amazing to network and get connected with other AAPI UCC'ers.

The other optional workshop I attended was Join the Movement for Racial Justice with the Rev. Dr. Velda Love. What I really loved during this workshop was the opportunity to speak with others in a breakout room answering the prompt of  "what does it look like to be an anti-racist community/church?"  and the four (4) of us in the group spoke about what struggles we are facing within our own communities. A big concern I heard from others was the lack of diversity within their churches; where BIPOC cannot speak about their experiences in the church. I encouraged all of them that it is still important for white people to have conversations about whiteness and what that means. I  encouraged everyone to not give up and to continue to have difficult conversations about racism within all our churches.

Haley Hudler (she-her) is a General Synod delegate and is a member of United Congregational Church of Bridgeport, CT.