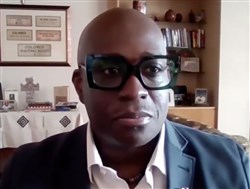 As I have sought to make meaning of both the public discourse about “critical race theory” and the ongoing effort to restrict voting rights, I have been drawn to the words of Proverbs 14:25: A truthful witness saves lives, but one who utters lies is a betrayer.

You may know that Proverbs 14 is a collection of 35 adages, most of which contrast one concept or manner of being with another -- wise and foolish; patience and impatience; fear and confidence. In the same way, verse 25 places “a truthful witness” in contradiction with “one who utters lies.”

Biblical scholars remind us that the role of witnesses is to aid in the cause of truth and justice by sharing what they have witnessed. This helps those charged with determining whether an accused person is guilty and can assist an innocent person in avoiding punishment or even death. A lying witness, on the other hand, spreads darkness and confusion, makes it difficult to garner the truth, and can cause an innocent person to face inappropriate penalties.

Sadly, there is much uttering of lies in the claims of voter fraud – lies which are being used to justify new laws that make it harder for poor people, people of color, and members of other minoritized groups to vote. Similarly, political operatives have latched onto the term “critical race theory". They have taken it out of its legal studies context and popularized preposterous claims that it advances Marxist ideology, and is anti-white, divisive, and abusive.

The claims have become so pervasive that they were a rallying call during a recent conservative Christian conference. In addition, legislative bodies and public school districts throughout the country – including in New England - are having conversations about banning the topic, which is not taught to school children.

The term critical race theory was coined by the legal scholar Kimberle Crenshaw and refers to a means of interrogating the role that the law plays in supporting, advancing, or maintaining the subordinate status of African Americans, indigenous people, and other groups of people in American society. Watch Kimberle Crenshaw explain “critical race theory” on MSNBC’s “The REIDOUT".

Of course, these lies are not without purpose. They are a cynical political strategy that seeks to disassemble the broad-based, multi-racial solidarity that emerged following the death of George Floyd in Minneapolis last May. Core to the strategy is to reframe anti-racism efforts as the causes of racism and to create animus among white Americans who are working with people of color in the effort to reform policing systems, address systemic racism, and to advance justice in other ways. It is a well-honed strategy that has worked at other times in our country’s history.

Simultaneous to this campaign, more than a dozen states have passed laws that experts say will make it more difficult for people of color and young people to vote – with others expected to do the same. Congress has sought to respond to combat this with federal legislation, but in a vote along party lines, members of the U.S. Senate on Tuesday blocked consideration of the For the People Act  According to The New York Times, it “would have ushered in the largest federally mandated expansion of voting rights since the 1960s, ended the practice of partisan gerrymandering of congressional districts, forced super PACs to disclose their big donors and created a new public campaign financing system.”

These threats to justice are significant. Certainly, members of already vulnerable populations have much to lose, but so does our society at large. As always, we should be prayerful, and I solicit your prayers and contemplation. I believe this also is a time for people of faith to channel Jesus, some Jesus energy, call out evil where we see it, and invest ourselves in bringing about change. As Legislative Advocate Michele Mudrick writes in today’s newsletter, churches and faith-based nonprofits are prohibited from engaging in partisan political acts but we who follow Jesus are called to be involved in the political process to advance legislation and policies that reflect our values.

In the coming days and weeks, we will suggest specific ways for members and partners in the Southern New England Conference to get engaged. In the meantime, I believe we would all benefit from learning as much as we can about these and other issues, finding ways to connect to the related work of other organizations, and even giving money as we are able to support these efforts. This is our faith in action, and it can help bring forth the world we desire.

As we work toward this, may our still-speaking, still-acting God help us to identify betrayers who utter lies and to partner with truthful witnesses to save lives.