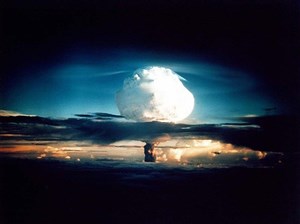 If you have not yet heard, World War III surreptitiously has begun.

Our enemy is not a singular nor cluster of nations, but the insidiously deadly COVID 19 in all its ugly manifestations. So unique is this invasion, so widespread, that the world has yet to come to grips with the fact that this viral war militarily cannot be conquered, no matter how formidable the weapons. Those on the front lines today are not troops; they are medical personnel together with essential workers, many strained to the breaking point over the onslaught of critical care, especially in nations like Brazil.

To win any war, one must draw upon every resource available, including the shift of present funding for conventional armaments, such as the upgrading of more sophisticated nuclear warheads and delivery systems. In 2018, our Western Massachusetts Task Team formed to confront the ecological catastrophe that would, according to the Physicians for Social Responsibility, ensue from the launching of even a small fraction, namely 1%, or 150 weapons, of existing arsenals of the nine possessor-nations, which includes enigmatic North Korea. The impact in a matter of weeks would kill literally billions, perishing under a vast nuclear charged cloud circling the globe.

Horrible as this may sound, there is good news to celebrate and advocate. In July, 2017, the U.N. formally approved the Treaty on The Prohibition of Nuclear Weapons (TPNW). Now ratified by 54 nations and signed by the parliaments of 82 nations, it bans both the presence and also the production of these weapons or their components. The Treaty entered into force on January 22, 2021. Of course, the nine possessor nations have refused to sign or ratify, but increased pressure is now upon them to collaborate on a plan of gradual nuclear weapons reductions, say 10% per year for ten years, or sooner. It would also go a long way to ensure that would-be nations like Iran and Saudi Arabia, would desist in efforts acquire nuclear weapons.

What can our congregations do? There are a growing number of excellent resources at our fingertips to draw upon, both to keep informed and also be inspired to act. At the Milwaukee Synod of 2019, our Team’s Resolution entitled Back From The Brink (a creation of PSR and the Union of Concerned Scientists), virtually passed unanimously, even though, as presenter, I was unable to attend due to health issues. This Resolution is easily adaptable to your church for consideration. In Western Mass. eight UCC churches have signed on already.

There is also an arm of ICAN’s (International Coalition Against Nuclear Weapons) campaign called Nuclear Ban.US, with the founding chapter in Northampton, Mass, in which I am active. Our team has spent six months (pre-COVID) creating a five-session workshop for local churches or any group, entitled “Do Unto Others,” utilizing the input of members from three Massachusetts UCC congregations: Northampton, Haydenville, and West Cummington. We hope you will consider using it, if for no other reason than justifying the many hours needed to bring it to fruition.

As the viral war continues to take its toll, now is the time for the US and world to bring all their resources to bear. We further hope that here in SNEUCC we can be regarded as an integral witness to the Commission of Environmental Ministries, given the possibility of a virtually instant, unthinkable climate emergency. (disaster?)

If we can assist you to take a stand against nuclear arms, contact us at popkakos9@gmail.com.