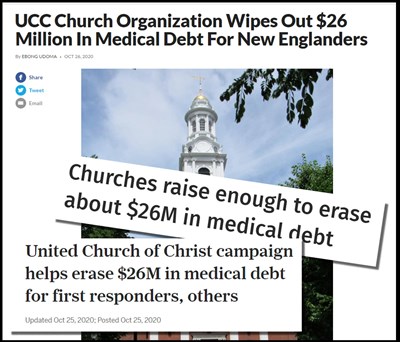 Have you seen the United Church of Christ in the news this week?

We announced on Sunday that the Southern New England Conference had abolished $26.2 million in debilitating medical debt for people in need in our region, and for first responders and health care workers across the country.

The story, as they say in the business, has gotten some traction. It was covered by a number of large local media outlets - The Boston Globe, WSHU Radio in Connecticut, The Republican in Springfield, MA, The Worcester Telegram, ABC6 in Rhode Island  - and by the Associated Press. The AP story was picked up by more than 50 media outlets around the country, including US News & World Report.

But perhaps most gratifying to me?  A friend of a friend - who as far as I know has no connection to a church - shared the ABC6 coverage on her Facebook page with the words: "When churches act like churches... when love for neighbors looks like love for neighbors...That’s super cool love of God on display right there."

Super cool love of God. What an amazing message to send at a time when our country is so on edge and divided.

Can you help spread the word?

Whether or not you or your church participated in this effort, you can help spread the news by sharing the story within your church and beyond - on Facebook, on Twitter - wherever you share good news with your friends, family and acquaintances.

If your church did participate, I invite you to use the press release below by customizing it with your church's information and sending it out to your local media outlets. Send it to the local weekly or monthly paper or radio station. Send it to your community blogger. Submit it to the Patch. Wherever people in your community get their news, let them know about this.

Because everyone could use a message about the super cool love of God right about now.


YOUR CHURCH NAME joined with 121 other churches to abolish $26.2 million in medical debt for New Englanders and first responders

YOUR CHURCH NAME was one of 122 United Church of Christ congregations, four Associations, and more than 100 households in the Southern New England Conference that worked together to abolish $26.2 million in medical debt for those most in need. Families in seven states plus first responders around the country will soon be receiving letters telling them that their medical debt has been forgiven.

At an Oct. 25 news conference, local, regional and national UCC leaders announced that a Conference-wide fundraising campaign in Connecticut, Massachusetts and Rhode Island, birthed before the pandemic, along with a contribution from a national ministry of the UCC, raised over $200,000. The gifts were sent to the New York-based nonprofit RIP Medical Debt.

A yellow envelope bearing a UCC logo is on the way to each benefiting family, with a letter naming contributing congregations and organizations. It reads: “You may never enter the doors of one of our churches, but we are the United Church of Christ and we love you. … Most importantly, you are beloved by God and your debt has been forgiven.”

YOUR CHURCH NAME raised $XX for the effort - canceling (YOUR AMOUNT x $100) in debt - by (FILL IN HOW - offering, mission budget, etc.)

USE THIS QUOTE  - OR REPLACE IT WITH A QUOTE FROM SOMEONE IN YOUR CHURCH ABOUT WHY YOU DID THIS
“Our scriptures call us to bring good news to the poor, to proclaim release to the captives, to let the oppressed go free,” said the Rev. Jocelyn Gardner Spencer, senior pastor of the United Church on the Green in New Haven, Conn. “In the midst of a pandemic that is disproportionately impacting communities of color, and with wide-spread unemployment causing people to lose their insurance just when they may need it most, eliminating medical debt for vulnerable individuals and families is a tangible way in which we are responding to our call to make God's love and justice real.”

The debts were forgiven in two separate buys. The first wiped out $8.4 million in debt for 7,175 households in the six New England states and New York - all of the debt available in the secondary debt market i the region at the time of the buy. The second wiped out $17.8 million in debt for 12,144 health care workers and first responders across the United States.

Specific criteria were used in both debt buys. Qualifying debtors were those earning less than two times the federal poverty level; in financial hardship, with out-of-pocket expenses that are 5 percent or more of their annual income; or facing insolvency, with debts greater than assets.