Not So Solitary Confinement

Not So Solitary Confinement

It’s day two of General Synod and I’ve not had a minute to myself since leaving home three days ago. Demands of traveling with a 15 year-old filled with questions that had no answers, I was physically and emotionally spent even before we accessed our hotel room prior to registration. So the thought of just two minutes of “alone time” seemed very inviting indeed.

I asked to be placed in “solitary confinement” for a period of two minutes. I sat on the rock-hard bed with my back against the wall and closed my eyes. Initially the quiet stillness stole over me in a calming, welcoming sense of peace. Then the banging and moaning started. I kept my eyes closed. Soon my heart rate matched the frantic pounding that surrounded me. There were mournful wails and far-off sounding screams – all adding to a growing sense of disquiet. But through all the sounds of confinement I could hear the familiar sounds of Synod going on all around me, reassuring me that I wasn’t alone and that life continued around me. Then out of nowhere an annoying beeping started, and I was told my time was up. The attendant came in as asked me about my experience – I told her about my heartbeat and the reassuring sounds of Synod – and then I asked for more…just 5 more minutes. 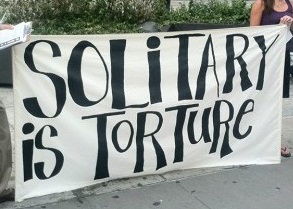 This time when the door closed I was determined to keep my eyes open and get a different, more sensually complete perspective of confinement. The space was larger than I had imagined – there was room to walk around – perhaps three steps from the bed to the toilet. The walls were institutionally cold and drab, and most likely way too free of dirt and grime. There was a single light offering a relentlessly stark feeling to the space. I remained seated on the bed with my back to the wall. I waited for the sounds to start. The banging started at first rhythmic and slow, then growing in frantic intensity. I listened with my eyes opened and realized that there was nothing in that space that I could use to bang with except my own body. I realized with a sickening certainty that the banging was being made by people throwing themselves against the walls of their confinement.

Suzan is a member of South Congregational Church, UCC, Amherst.