9/16/2020 - by: Gwen Lawson - Making Disciples
Share
Even in the empty stairwells of a church gone silent during a pandemic, God is still speaking…
by Gwen Lawson, Christian Education and Junior Youth Group Director at Congregational Church of Marlborough,CT 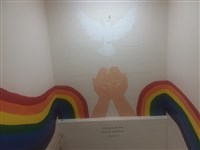 Alexa Odoy, a 9th grade student at RHAM HS in Hebron, CT, has been attending Marlborough Congregational Church her entire life.  She worked her way through the Sunday School Classes, was a member of the Junior Youth Group, and as of this past year is involved in the Confirmation program.  In May of 2019, I asked Alexa what she would like to do to commemorate her last year in the Junior Youth Group.  I was expecting something along the lines of Ice Cream Sundaes, Pizza, Roller-Skating.
Alexa directed my attention to a stairwell in the church and she said she wanted to paint a mural.  She told me how she had always thought the bare, white walls of this particular stairwell were so sad and lonely.  Each room, hallway, and stairwell in the church had been painted with beautiful scenes and designs by one of our talented church members – each one, but this one.  With the year coming to a close, there wasn’t enough time to get a plan together, pass it through the proper channels, and complete the project.  So we didn’t get to celebrate Alexa’s final JrYG year as she had truly wanted.  But I kept her request in the back of mind.
Starting in November of 2019, we began a joint 8th and 9th grade Confirmation Class.  Alexa joined the class and when it came time for the students to start choosing a project to work on during Lent, I asked Alexa if she had been serious about painting a mural in the empty stairwell.  She was more than serious, she was passionate about it.  She developed a plan and created a rough draft on her phone.  Then she met with the CE Board, with Council, and obtained permission and received blessings from all the “powers that be.”  This didn’t surprise me one bit, because I knew the first time she showed me her plan for that stairwell, she had already received the blessing of THE “powers that be.".
The church shut down in early March, during Lent.  Our teens were struggling with distant learning, peer-separation, and the anxieties that come with a global pandemic, so we set the Lenten projects aside.  I talked with the Confirmands about ways to continue their projects at home and how they could be applied to our current situations, but I did not really push the assignment.  Then, one day, Alexa sent me a picture of her on a ladder with her dad in the stairwell.  They were creating a grid so that Alexa could accurately create a stairwell version of her 8.5”x11” sketch.  For the next few months, while the rest of the church remained sad and lonely, this stairwell was brought to life.
"I wanted to fit the theme of the dove and what it symbolized in the bible so I chose this one. The design is inspired by the story of Noah's arc, but the rainbows also represent us as an Open and Affirming church," commented Alexa.
The scripture painted beneath her creation is from Mark 9:23, “All things can be done for the one who believes”.  How true, how very true.  Thank you, Alexa, for reminding us that even in this lonely, sad silence, God is still speaking.

Gwen Lawson is the Christian Education Director of The Congregational Church of Marlborough, CT.