6/12/2020 - by: Marilyn Kendrix
Share
It’s Impossible to be a true disciple of Jesus without empathy. 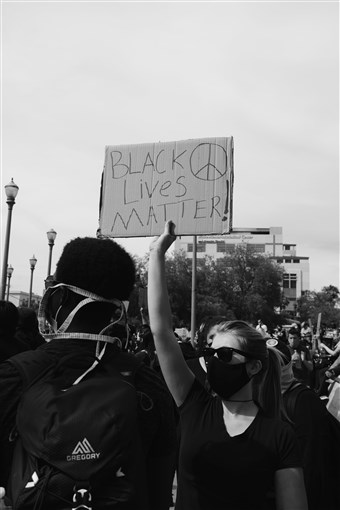 As I sat these past two weeks watching the peaceful protesters all across America marching out their indignation and disgust, I felt good.  Reading the Black Lives Matter signs being held high in the air by blond-haired, blue-eyed demonstrators made me smile and almost laugh out loud in delight.  The crowds were black and white and brown, mostly young folks but some grey hairs also.  The demonstrations were happening in the north and the south, on the east coast and in the west.   As I watched police talking civilly with individual black protesters, taking a knee with them, a courageous act of solidarity, I was brought to tears.  It was a moment when true empathy was on display.  And no wonder.  Hardly anyone in our nation was able to watch the murder of George Floyd and not feel empathy for him and for his family who grieve his loss.  And that’s good.

“But what,” say my white friends, “about the looting?  The looting just distracts from the issues and damages THEIR cause.”  Well, I would maintain that in order to be true disciples of Jesus, one must be able to feel empathy even for those whose actions we abhor.  Jesus told us that the greatest commandment was that we love our neighbors and are not these people our neighbors?

Trevor Noah of Comedy Central’s Daily Show has a YouTube video that gets at the reason why folks loot and burn. He says, “Society is a contract that we sign as human beings amongst each other. We sign with each other, whether spoken or unspoken, and we say amongst the group of us, we agree to common rules, common ideals and common practices that define us as a group.  The Contract is only as strong as the people who are abiding by it. … What vested interest do people living in Minneapolis [or any America inner city] have in maintaining the contract?”  What happens  if the police, who are supposed to protect and serve, break the contract?   What happens when the pursuit of happiness part of that contract has left you behind?

Can you imagine living in that inner city?  Part of that contract has to do with being able to purchase what you need to make life livable, maybe even enjoyable.  Intentional systems in America have created an underclass of people, Michelle Alexander would say an under caste, who can’t afford to pay for food and rent at the same time.   We have structured society in this nation such that the jobs that many African American (and Latinx) people can get are in the service sector, where paying below minimum wage is legal. And, in this time of pandemic, they are considered essential workers who are required to risk their lives for a wage that cannot sustain their families.  We have a minimum wage that is below the level where a 40-hour a week job can sustain a family and these folks don’t even make minimum wage.  Their children are bombarded with all kinds of ads for toys and video games (that require a TV to run) every day but their parents cannot afford to buy those things. Their parents see in movies and on TV how the other half lives and know that they cannot even dream of living with their families in what must seem like opulence. Imagine.

So, we have people who live lives on the very edge of survival, who must be ever vigilant lest some policeman decides that today is the day to harass them.  We have people living in the small concentrated areas of poverty where America’s housing policies have corralled them and where big business dumps it’s toxic waste and public officials save money by changing the source of their water, thus poisoning their children with lead.  We have people who are disrespected day after day by some of the business owners in the neighborhood.  And yet, we say, “What about the looting?”  We watch some white people on the news who are incensed that the government suggest that they wear a mask in public. So incensed are they that they take over a capitol building, and we cannot muster empathy for black people whose very existence in a racist society causes “underlying conditions” that set them up as the most vulnerable victims of pandemic.

When I watch looting on the news, I think about the rage that living conditions have driven some of these children of God to the edge.  I understand that the chaos provides an opportunity to “go shopping.”  Don’t get me wrong.  I do not approve of looting. I do not approve of burning buildings and police cars.  But I certainly can understand why some folks would do just that.  I can feel empathy for them and seek to find ways to make their lives better. Let me say that again.  I can feel empathy for them but that is not enough if we call ourselves disciples of Jesus.  We have to seek ways to make their lives better.  We do that by demonstrating today.  But we also do that by voting tomorrow, not just in national elections but in local elections for sheriffs and prosecutors and mayors and commissioners.  We do that by advocating for an end to police brutality and a living wage for all Americans.  We do that by providing funds, yes, tax payer funds, dare I say reparations, for the development of our inner cities and creation of opportunities for the people who live there.  And we show enough respect for them that we don’t tell them how to use the funds.  Believe me, they know what their communities need.

This is the work that Jesus calls us to. And yes, it is impossible to be a true disciple of Jesus without empathy.

Photo by Mike Von on Unsplash