3/19/2020 - by: Kelly Gallagher - Justice and Witness
Share
Jesus called the children to him, saying to his disciples, ‘Let the children come to me, and do not hinder them, for to such belongs the kingdom of God.’ ~ Luke 18:16 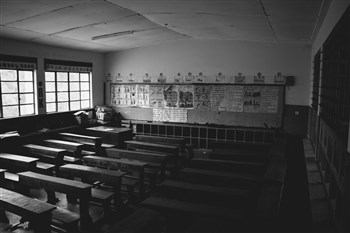 In a time when children were not honored or even considered, Jesus tells the people that it is they who hold the realm of God in their hands. Jesus teaches that it is from the children we must learn how to enter the realm of the Holy One. The message seems clear.

Last month we considered the Doctrine of Discovery and Manifest Destiny and their legacy among us even to this day. As we continue the journey in 2020 of taking a hard look at this nation’s founding and the impact on the indigenous people that were encountered, we must acknowledge how the government – largely through the churches – sought to control the children. In the late 19th and early 20th centuries the federal government established boarding schools – largely funding denominations to run them – for the primary purpose of assimilation into European-American culture and the annihilation of Native American culture. This history has, for the most part, been ignored in the European-American memory. It has, however, been the source for generational trauma in the lives of Native Americans across this country.

From the National Native American Boarding School Healing Coalition (boardingschoolhealing.org):
“Beginning with the Indian Civilization Act Fund of March 3, 1819 and the Peace Policy of 1869 the United States, in concert with and at the urging of several denominations of the Christian Church, adopted an Indian Boarding School Policy expressly intended to implement cultural genocide through the removal and reprogramming of American Indian and Alaska Native children to accomplish the systematic destruction of Native cultures and communities. The stated purpose of this policy was to ‘Kill the Indian, Save the Man.’”

The boarding schools are largely responsible for the loss of many indigenous languages and cultural traditions. At the time the government outlawed Native religious ceremonies, they were also requiring attendance at European-American boarding schools for children where they were forced to deny their families and culture. Whole generations of children were punished for speaking their native languages, taken from their families and forced to cut their hair and learn European culture. They were rewarded for cultural assimilation and, when returned to their communities now on reservations, found themselves caught between two worlds. While some of the schools offered education and the opportunity to move toward college and career, the emotional and spiritual damage done to so many individuals cannot be overlooked or justified. And much of this abuse happened at the hands of Christians.

One of the goals to assimilate included the desire to “Christianize” the children. At the time, being a citizen of the United States and being Christian were synonymous. Much of the work of assimilation was handed over to the church – either officially, or by virtue of the character of those who ran the schools for the government. As people of faith, we are called to know this piece of our history, reflect on how this past is reflected in our current mindset, and to seek healing and reconciliation for all. Here are three articles that address this topic from a faith perspective worth considering:
Time for Acknowledgement: Christian Run Native American Boarding Schools, The Traumatic Legacy of Indian Boarding Schools, and from Canada, Stolen Lives: the Indigenous Peoples of Canada and the Indian Residential Schools.

After the government ended the funding for the schools, policies were put in place to remove children from Indigenous homes and place them in white, Euro-centric homes. Through the continued belief that assimilation was best and European-American culture was superior, the nation continued to damage Native American society. The State of Maine is the first state in the country to establish a Truth and Reconciliation Commission to address these historical practices and their impact on the people there. The movie Dawnland  Documents the work of the commission and the stories of the Native people as they work together to heal. The Conference is working to obtain streaming rights (keep checking our resource page) and you can ask your local library to acquire the film either in disc or digital form.

These are difficult truths to uncover. And yet we must know the truth of our history that our present and future can truly resonate the love and justice of Jesus. Let us not shy away from our past, but face it with the desire to learn what we can, apologize for our part in hiding or upholding the pain, and reconcile where it is right and appropriate. Let us pray without ceasing that the Holy Spirit will guide us in this work that we might grow deeper in our faith as disciples of Jesus.