2/26/2020 - by: Deborah Ringen - Justice and Witness
Share
“Every moment involves the divine call and human response. Although we believe that God is not the source of illness, divine wisdom is revealed in illness as well as in health. How we die and our end of life choices have ethical and theological implications”.   UCC STN- The United Church of Christ Science and Technology Taskforce 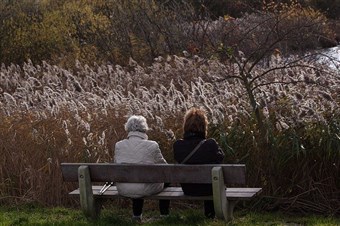 The topic of death and dying in the United States has long been a taboo subject.  Instead of dying peacefully at home surrounded by loved ones, many are in the hospital hooked up to multiple machines and receiving heroic measures to prolong life. People are living longer and living with one or more chronic conditions that require varying levels of medical management and inflict variable degrees of discomfort, dependence, and impact on longevity. Asking ourselves whether a proposed treatment or intervention might improve quality of life or prolong suffering has become a very important question. As a faith community nurse, I have walked alongside congregants struggling with this question. This is a very personal, spiritual decision.

One debate that has come to light in this dilemma is whether a terminally ill, mentally competent patient has the right to request and receive medication from their physician to hasten their death. This debate is particularly pertinent for UCC members in Massachusetts as legislation to allow medical aid in dying is being brought before the Public Health Committee on April 1, 2020.

Members and leaders of The UCC have prayerfully considered how to address the issue of the legalization of physician aid in dying including resolutions brought forth in 2007 and 2009. Their conclusion was the need for more conversation and study.

Death with Dignity legislation makes it possible for terminally ill, mentally competent patients request a prescription from their physician that would facilitate a peaceful death. Proponents believe that this helps alleviate profound suffering and that the appropriate safeguards are included in the legislation to prevent misuse of the medication. This process is completely voluntary for patients and physicians. States with Death with Dignity legislation report no instances of misuse of the prescribed medication, many patients who receive the medication are also enrolled in hospice care, and approximately one in three patients never take the medication.

Opponents of physician aid in dying cite concerns related to misuse of the prescription, and potential for elder and disability abuse by family members who encourage the patient to request aid in dying. Promotion of palliative care, pain control, and the value of all life including those that are dependent on others for care are the basic arguments for disability rights as reported by Second Thoughts disability rights activists.

I like many others can understand both sides of this issue. As a person with religious values and beliefs I am called to inform my opinions through the lens of my faith. Beliefs about the sanctity and meaning of life and death influences one's position on Death with Dignity legislation. I encourage you to prayerfully consider this issue, speak with your clergy, talk with others and let your legislators know how you feel.

This is the public notice from Death with Dignity in Massachusetts:

The Massachusetts Legislature is considering a bill called The End of Life Options Act. It's also known as the Death with Dignity bill.  If passed, it would make Mass. the 10th state (Maine, Vermont, New Jersey, etc.) plus Washington DC, to legalize the option of medical, compassionate aid in dying for citizens who are terminally ill, mentally capable, and facing extreme pain and unrelieved suffering at the end of life.

If you would like more information about this important issue, either pro or con, go to the websites of Death with Dignity National Center, Compassion and Choices, or Second Thoughts on Assisted Suicide.

If you already support passing such a law in Massachusetts, please contact your State Representative and Senator, and urge them to support passage of H.1926 and S.1208--first by the Public Health Committee by April 1, then by the full House or Senate later in the spring.  For more information about how to contact your legislators, contact Western Mass. Death with Dignity at 413-387-8439,   westernmassdeathwithdignity@gmail.com

Epperly, B., Mills, J. (2009). "A Word to the Church on End of Life Care: Theological, Spiritual, and Ethical Reflections". The United Church of Christ Science and Technology Task Force, retrieved February 20, 2020

Deborah Ringen is the Minister of Health and Wellness for the Southern New England Conference, UCC.