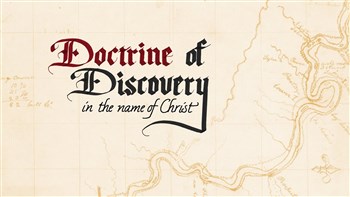 As we continue through this year of 2020, as the Mayflower once again plans to sail into Boston Harbor, as we revisit the 400-year-old history that brought European Christians to this shore, we are called to also learn about and seek to understand the impact that arrival had on the people living here already, and whose descendants remain.

We are called to acknowledge the impact it still has today on the descendants of the First Peoples. In order to do that, we must reflect on the role the Church had in establishing precedent and doctrine for colonization, and how we still think and act from that place.

This month, let us spend some time learning about the precedent-setting document from the 1400s known as the Doctrine of Discovery. As described by the Upstander Project: “The Doctrine of Discovery established a spiritual, political, and legal justification for colonization and seizure of land not inhabited by Christians. It has been invoked since Pope Alexander VI issued the Papal Bull “Inter Caetera” in 1493. The Papal decree aimed to justify Christian European explorers’ claims on land and waterways they allegedly discovered, and promote Christian domination and superiority, and has been applied in Africa, Asia, Australia, New Zealand, and the Americas.…This ideology supported the dehumanization of those living on the land and their dispossession, murder, and forced assimilation.The Doctrine fueled white supremacy insofar as white European settlers claimed they were instruments of divine design and possessed cultural superiority.”

The Doctrine of Discovery gave permission in the name of God to our most base human drive to conquer and enslave. This Papal decree allowed the Pilgrims landing on these shores to give thanks to God when they discovered whole communities of Native peoples dead and dying from illness. Indeed, they believed it was God’s will, as was reported by a witness, “…the hand of God fell heavily upon them, with such a mortal stroke that they died on heaps as they lay in their houses…” (excerpted from Plymouth 400) The deep irony is that this “Great Dying” was caused by the European diseases brought by explorers and conquerors, from Columbus onward.

In 2013, the General Synod of the United Church of Christ passed a resolution repudiating the Doctrine of Discovery. We joined with Episcopalians and Methodists as we acknowledged that the Doctrine of Discovery was formative in our theological understanding of colonization, and the right of the church to participate in colonizing action and belief. Read the resolution here. In 2015, the UCC released a curriculum and a video to educate and encourage churches to reflect on this foundational document, ponder how it still informs our thoughts and actions today, and provoke new ways of being and thinking. This curriculum is full of testimony and challenging questions, prayer, scripture and an opportunity to dig deep. I reccommend this tool for you and your church in the coming year. View and download here.

In the coming months, as we enter our season of Lent, let us take some time to reflect, repent and turn again toward God’s call upon our heart and lives. In coming to know what formed the basis for our past
actions, perhaps we can affect change in our current actions. Let us consider how the Doctrine of Discovery has formed our thoughts and understandings. Then let us hold it up against the Gospel of Jesus Christ and commit to walking that path.

Every month during 2020, we will offer reflections on our church’s history and current reality in relationship to Indigenous communities, inviting our churches to consider the current impact of our historical actions. This is an invitation to repair and restore broken relationships – or to establish relationships that were never given an opportunity to form.