7/30/2019 - by: Judy Hanlon - Justice and Witness
Share
In the middle of May, I received an email from Paralegal Erin Anderson from Al Otro Lago, an agency that works at the border to free folks in detention and provide lawyers for that purpose. She said there was a 47-year-old man in detention there, from Honduras - and gay. He had walked for five months from Honduras to the Mexican border to seek asylum. Instead he was arrested and placed in a removal (deportation) process in an overcrowded detention center in San Diego. After suffering an assault there that was related to his sexual orientation, he was connected with Al Otro, who represented him. They filed an appeal for him to be released due to a credible fear of persecution in the detention center. 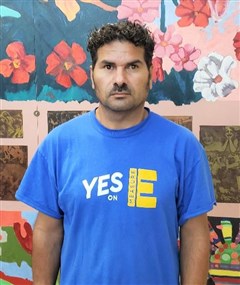 Erin said that the man, Selbyn Montoyo, needed to have a “sponsor” (which the LGBT Asylum Task Force does not do) or a place that will accept him into their program (which the Asylum Task Force does do). I wrote a letter explaining that we provide housing and a living stipend to LGBT asylum seekers during the 9 to 12 months that it is illegal for them to work, and emailed it to Erin. The other necessary aspect of his release was that someone had to pay the $7,000 bond. Erin asked if we could, and I said that we could not. At each interval I felt that Selbyn would probably be in detention for years, or deported, as the obstacles for ONE person to be freed were seemingly insurmountable.

But a miracle occurred, and Al Otro found the $7,000. They asked if we could pay for the flight; that is in our purview so we said 'yes' to the $500 cost of a flight to Boston. All of this was presented to the court. Then the email came, bold and simple: Selbyn is out of detention and on his way to you!

Selbyn told us later that when the news was announced to him, he began to tell everyone in detention to continue to HOPE because there are some people out there who care! He said that they had as much of a party that night as was possible. One man's release stirred hope in the hearts of many.

Selbyn is living with the LGBT Asylum Task Force now.  He is the kindest man and wishes only to pay back. He has done landscaping for two of our apartments that house asylum seekers. He asks how he can help every day. All he says, every time he sees LGBT leaders is, "GRACIAS, GRACIAS, GRACIAS!"

Selbyn’s father and brother were murdered by gangs in Honduras. He had to quit school in the first grade to go to work to support his family. Then his family disowned him due to his sexual orientation. He says (in Spanish) that he is not a worrier, that God has brought him through so many things, that he chooses not to be frightened or angry no matter what has happened, or what could happen, but rather to be thankful for life. He says, “My heart has peace.”

Selbyn wears an ankle bracelet. ICE requires him to report to their offices nearly weekly. On Thursday past, Selbyn was told that ICE was coming to his apartment to check on him. He sat on the front porch, but they never came.  He is, in my opinion, treated like a number and his time is of no value. Yet, he only wants to do the right(eous) thing because he says, "I am a man of dignity, not a murderer or ......".

Al Otro Lago emailed, stating that now they know the LGBT Asylum Task Force exists, we may get more asylum seekers from the border. There were times, in the past, that they didn’t fight to get an LGBT person out of detention because they could not release someone to the streets. Now, they said, they know where there is HOPE!

We are grateful for support of our work with asylum seekers like Selbyn. Even as I type this, we have three Ugandan lesbians and a gay Pakistaniani activist on their way to us. The need is great and unending! Please visit lgbtasylum.org to learn more. Meet Selbyn and other asylum seekers at our Gala on October 5 at the DCU Center, Worcester.

Pastor Judy Hanlon is the senior minister of Hadwen Park Congregational Church in Worcester, MA, and co-founder of its LGBT Asylum Task Force.