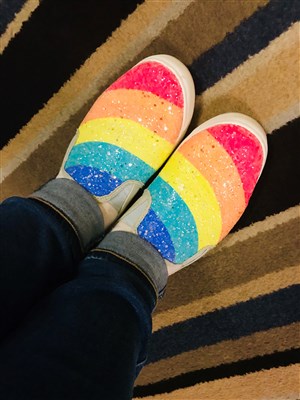 The morning brought a buzz that resounded from the lobby of the hotel. I didn’t have anything scheduled for my time this morning but there was still so much to do. It was time to Shine! So, as instructed, I put on my Massachusetts Conference Shine! t-shirt that we were given as delegates and made my way toward the buzz. Some were still arriving, adding to the growing hum of welcome bags, hugs, and shouts of allegiance as Shine! t-shirt after Shine! t-shirt congregated together. Lots of colors and logos, conference after conference offering their colorful spin on the widely embraced theme of this Synod. I’ll take a moment to say that our Shine! t-shirt was quite the attention getter. I’d been wearing it for only 2 hours and 9 people had come up and asked me where they could buy it. I watched their face drop a little as I gently informed them that MA had made them for their delegates. Props to you MA staff!

Shine! How appropriate. The light, la luz, that dwells within each of us, la luz that exudes from us far brighter than any colorful t-shirt or even rainbow sparkled shoes, la luz that we have gathered from all around the country to recognize and to share was what drew us together like moths. It was like we couldn’t help it, we needed to draw closer to la luz, something deeper than our bones yearned for it as if to announce its kinship. The light, la luz, consumed the darkness around it and enveloped us. The Holy Spirit was here and she was aglow! I saw it, I saw her in the feet of the dancers, in the drumsticks and the lanterns, I saw her in paint and in the music and in water, I saw her in face after face after face as we called her by name, “You are the light, I am the light, we are the light!”  Then, I saw her heart break as we stopped the 2019 General Synod in its tracks and repented and lamented in prayer for Phoenix Valley. God of the whole world ... forgive us. The light, la luz, was being raided, with guns and violence, la luz was in danger. There is no distance too far for light to touch light so we sent the light, the burning, white hot light of love from Milwaukee to Phoenix Valley. It’s time, church. It’s time to rise and SHINE!

The Rev. Holly Norwick is pastor of the First Christian Congregational Church in Swansea.