2/6/2019 - by: Liza Neal - Justice and Witness
Share
“How are the children?” I first heard Rev. Traci Blackmon ask this question when marching at General Synod in Baltimore two years ago.  A man was about to be deported from his community.  A man with children and grandchildren who are citizens, a carpenter who had created art that had been called the soul of the city, before it was clear that he was undocumented, before he was taken by ICE into a detention center.  We chanted together, “El pueblo unido, jamás será vencido. The people united will never be defeated.”

“How are the children?” Rev. Traci Blackmon asked again this August at the office of Border Patrol in Arizona.  Folks from UCC churches all over the country gathered for the Southwest Conference’s Faithful Witness at the Border.  This was just after outcries about the thousands of children being separated from their parents came to the forefront.  Children our government has recently said may be just too difficult for them to find.  More important to build a wall than reunite families.  Singing and praying all together, Rev. Blackmon called ICE to guard their souls. 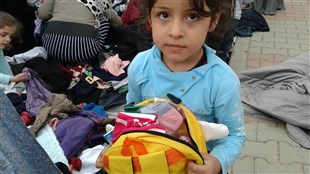 The children are what drove me to go to Tijuana this January.  A call had been made by a group called the “New Sanctuary Caravan” for folks to come and volunteer at the border for any amount of time during a 40-day period, to meet the “caravan” from Honduras with love instead of fear.  It was Christmas and my child was so excited about Santa Claus coming. I kept thinking about the children, many of them Christian, who would be spending Christmas at El Chaparral, the port of entry from Mexico into San Diego.

The first child I met when I went to Tijuana was 2 years old.  I pushed him around in a plastic crate, making car sounds, while the numbers were being called.  Each day people would gather in the early morning, either to get a number or to hear if their number was called.  Sometimes two numbers, sometimes 10 numbers, no one ever knew.  If their number was not called, then they would have to find shelter for the night.  The government was closing Barretal, the shelter that had been opened when they closed the one near the port of entry.  When folks left to see if their number was called that day, they had to take all their things.  They were not allowed to return, whether or not they were called.  If it was called, then they would come back in the afternoon, excited and afraid, hopeful and terrified, and get in line to get on a van with bars covering the windows.  We would stand with them in line, and then wave until they were gone. 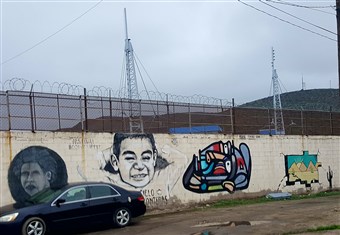 At the very same time, my student was trying to get out of detention in Atlanta.  He had been studying at Hampshire College while I was the chaplain there. He was a leader among the student body, known and loved by everyone. He spent weeks being tortured in isolation as lawyers were trying to get him out of detention. Though there were protests across the country calling for his release, his case was being rushed because he is an activist.  He was denied due process and then deported.

Every day in Mexico was heartbreaking, and yet every day was inspiring too.  Volunteers came from all over the country from all races, ages, abilities, sexual orientations, gender expressions, religions, and so on.  Sanctuary Caravan was being run on the ground by extraordinary young people in their twenties, making it up as they went along, creating miracles out of nothing.  There were volunteers working on the San Diego side helping asylum seekers released from detention. There were volunteers on the Tijuana side feeding thousands of people twice a day with World Central Kitchen, helping at a medical clinic, or explaining the asylum process and trying to answer legal questions at Al Otro Lado.  Recently the two main lawyers volunteering at Al Otro Lado were denied entrance to Mexico as the U.S. administration wages its war of cruelty.

The last two children that I met gave me gifts.  With literally one box holding all the possessions of their entire family, they were insistent that I take the toy car and stuffed bear they were giving me.  The mother asked me to pray saying, “Tengo miedo, tengo miedo.”  I am afraid. I am afraid.  It was something I heard again and again, pray with me, I am afraid.  They have been separated from their father, and though the children are no longer in detention, their father still is.  Families are still being separated.  And there are many other children I met – from Honduras, Guatemala, Haiti, Venezuela, Mexico, Ghana, and Cameroon – whose stories are too long to fit in this one blog.

Jesus said that it would be better to put a mill stone around our neck and drown in the depths of the sea then to allow one of these little ones to stumble.  Children are still being separated from their families, people are being sent back to die, and people are being tortured right here in the United States.

Sanctuary is not a political idea.  Sanctuary, and the Sanctuary Movement, did not come from a secular non-profit organization, school, or politician.  Sanctuary came from the Church.  We have the power to take a stand based on our faith, to change people’s hearts.  We have the power to get people out of detention, to support asylum seekers, to protect innocent children, and show the world that Jesus came “to bring good news to the poor, to proclaim release to the captives, to let the oppressed go free,” and that is the Jesus we follow - not just on Sunday, not just with our words, but with our feet, our hands, our whole lives.  In the words of Rev. Blackmon, “The children are not well.”  And we are their keeper.  So let us guard our souls.  Let us Be the Church.

Liza Neal is an ordained UCC minister, and manager of Seala ag Canadh: Beyond Binaries & Borders
Photo of the wall shown from the Tijuana side, by Liza Neal.

Liza Neal is an ordained UCC minister and manager of Seala ag Canadh: Beyond Binaries & Borders