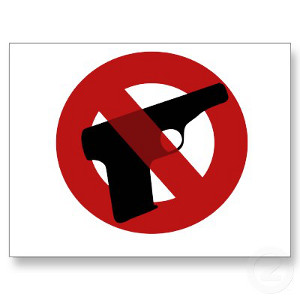 Galvanized by the horrific shootings at Sandy Hook Elementary School and continuing gang violence and murder throughout Massachusetts, many faith communities, the Greater Boston Interfaith Organization (GBIO), and nonprofit organizations banded together in January 2013 to form the all-volunteer Massachusetts Coalition to Prevent Gun Violence.  The goals of the Coalition are to increase public awareness of gun violence and to work for strong, common sense gun laws in . Visit the coalition's website for more information, including member organizations. New members are welcome.

In my own church, First Church Cambridge, UCC, we were drawn to the work of the Coalition in the wake of Newtown and the Boston Marathon bombings and also because of an already existing concern about violence in our city. We wanted to raise our voices and join others in working for safety on our streets and in our schools by all possible means—legislative, social and all others.  We realize we must counter the efforts of a well organized and well funded gun lobby that objects to many common sense steps that would make all citizens safer.   As one of the parents said so poignantly at a legislative hearing in this fall, “If you could save even one life, why wouldn’t you do it?”

Although Massachusetts has some of the strongest gun laws in the country, and, as a result, the second lowest rate of gun deaths in the US (behind Hawaii), many aspects of existing laws regulating the purchase and licensing of firearms need to be strengthened, to reduce the number of illegal guns in circulation and limit access to them by unsuitable persons. The Mass Coalition identified five priorities for new legislation:

Universal background checks at point of sale every time a gun is sold, including private and gun show sales.

Limit handgun sales to one per month to deter straw purchases and multiple purchases by traffickers.

Require law enforcement authorities to attempt to determine, every time a gun is involved in an injury or death, the owner of the gun and where it came from; and to maintain and share that data with public health researchers, policy makers and the general public.

As I write this, we are waiting for action by the legislature.  A committee of experts from the fields of public health, law enforcement and mental health, who were appointed by Massachusetts House Speaker Robert DeLeo in January 2013, issued a long-awaited  report on February 3, 2014.  Included in the 44 recommendations that the committee made to be enacted into law were four of the five Mass Coalition priorities.  Left off the list of recommendations was the limitation of “One handgun a month.”  It is now up to Speaker DeLeo and the Joint Committee on Public Safety Committee to act, to move ahead by filing legislation so that the House and Senate can debate and vote on it.  We are awaiting that action.

In the meantime, we are preparing to lobby for the five Mass Coalition priorities, and we would welcome new members to the Coalition to join in this effort. The work and influence of the Coalition would be strengthened by many more churches and groups joining, particularly from central and western .  The geographic strength of the Coalition is in the area where it was formed, Metro Boston.  Groups and congregations from central and western parts of the state could play an important role in influencing legislation.

We anticipate that Coalition members will be called upon to contact legislators, to ask them to support certain provisions of the anticipated legislation or amendments to it.  Such contacts can be brief phone calls and email messages, for which the Coalition will suggest language.  These calls will not take much time but do carry tremendous weight. Legislative staff tally them, and legislators seem to pay close attention to what their constituents are telling them.  We can be sure that GOAL, the affiliate of the NRA, will be inundating legislators with their views.

No matter where your church or home is, your voice is importanJoin Faith Communities in the Mass Coalition to Prevent Gun Violencet.  Please contact Rachel Lewis of the Mass Coalition at rlewis@jcrcboston.org if you are interested in supporting the Coalition and this lobbying effort.  Please contact me or our minister, the Rev. Dan Smith, if you would like to know more about how this work is being organized in our church.

Submitted by Ann McCann ann.mccann44@gmail.com, on behalf of Witness Against Gun Violence and Inequality,  UCC.

Endorsed by the Justice & Witness Council