5/13/2014 - by: Mark Seifried
Share
The following is by Rev. Mark Seifried of the Massachusetts Conference Restorative Justice Task Force.

Several studies recently have indicated that there is a cultural shift occurring where Americans are moving from the radical “tough on crime” mindset with mandatory sentencing to more holistic ways of reforming offenders with the goal of reducing recidivism.

The present judicial system is broken. The penal system is immoral. The majority of people serving sentences in prison have not committed violent crimes. Many received long sentences for petty crimes, including juveniles and first time offenders. Many sentenced to prison have complicated mental health issues that are never addressed. As a result prisoners deteriorate, become more “hardened” and aggressive. The prospect for life “outside the walls” is all but hopeless.

There are alternatives. Among them is Restorative Justice. The MACUCC recognized this almost 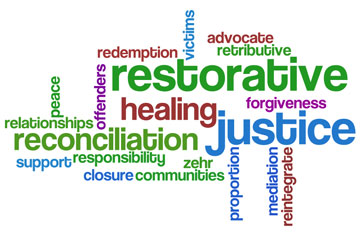 fifteen years ago, and passed a resolution on Restorative Justice. (Do you remember the bash we had at the Centrum in 1999 for our 200th Anniversary?) During these last 15 years, there has been a Restorative Justice Taskforce working with individuals and communities, particularly with youth, to ease the burdens of families, communities, courts, jails and prisons. We have also been active in promoting legislation to give police and courts Restorative Justice as one of the tools in their “tool box.”

It is down to the wire in the Massachusetts Statehouse for the Restorative Justice Act of Massachusetts. This measure would serve to divert youth and offenders from criminal justice into an alternative process involving all affected parties. This could be a very important step to prevent a lifetime cycle of homelessness and incarceration in Massachusetts, if you believe what the evidence says about youth and jail! We have made it far this year, with the measure now in the Senate Ways and Means Committee.

Please make a call to your State Senator for a final push, and ask them to ensure Senate #2078 moves out of Ways and Means to the full senate. You can find your senator here: https://malegislature.gov/People/Senate.

With UCC congregations in most every community in the Commonwealth, we can have a large impact on the outcome of this bill. Please take a few minutes to help the gospel come alive. In doing so, you will save lives and tax payer dollars.