UCC's landmark lawsuit is an important step in defense of freedom

UCC's landmark lawsuit is an important step in defense of freedom

Or imagine that you are a minister making an emergency pastoral visit in a hospital. You arrive at the ER and learn that one member of this couple is dying due to injuries from an accident. His fiancé asks you to perform the marriage that was planned for two months hence. She pleads with you. Your pastoral heart and your conscience move you to offer this pastoral service. However, state law not only prohibits you from conducting the marriage service without a license, but it will also impose on you potentially large fines and a jail sentence of up to 120 days if you do.

In North Carolina, this is the reality for clergy. State laws have infringed deeply on the free exercise of religion. A pastor who chooses to perform a religious marriage for an elderly couple who does not want the state involved in their relationship at this stage of life-but want the affirmation of God and the Church-is prohibited from doing so. A pastor who is asked by members of his or her church to perform a same-gender religious marriage service will suffer retribution from the state.

Today, the United Church of Christ (as authorized by the United Church of Christ Board acting as General Synod ad interim) filed suit in federal court in Charlotte, North Carolina contesting the constitutionality of that state's laws on marriage. These laws prohibit a clergyperson from performing a marriage without having a license issued by the county in which the ceremony is to be performed. The basis for the suit is that these laws constitute an infringement of our constitutional rights of freedom of religion.

For us, as one of the founding religious traditions of this nation, the principle of free exercise of religion is a paramount value. Because we are not a hierarchical church, the freedom of every clergyperson to conduct the rites and sacraments of the Church according to the dictates of conscience is essential to our identity and our faith practice. These laws mean that a pastor cannot perform a service of religious marriage under the circumstances described above. 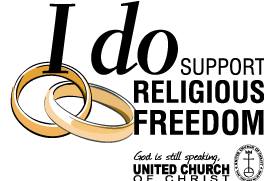 No matter what one believes about urgent or elder religious marriage or same gender religious marriage, the fundamental breach of free exercise of religion is what is at stake here. We cannot afford to allow this travesty of law to stand. We do so not only because it affects our clergy in North Carolina so profoundly, but because we will always defend the free exercise of religion - anyone's religion.

I believe this is an important step for the UCC to take in defense of the freedoms we hold dear. As far as we know, this is the first time a religious entity has sued on the grounds that these laws violate First Amendment rights.

I encourage you to visit http://www.ucc.org/ido/ to learn more about this lawsuit and the reasons for it. It is important that we all understand both the basis in law for this suit, and its basis in conscience.