A New Day, A New Way of Worshiping

A New Day, A New Way of Worshiping

Upon my return to my almost 400 year-old congregation on Cape Cod after a sabbatical in the fall of 2010, I was astonished to see that the church had suffered a marked decline in church school attendance, and indeed in attendance by families with young children across the board.  Both had been in decline for some years, but this was bordering on precipitous. When this was brought up at Church Council, the response was not atypical for a congregational church – to form a committee to investigate and report back with findings and solutions. But sensing that this was a technical solution to an adaptive challenge, I proposed an all-church retreat instead, with a stated goal at looking into ways in which the church might grow, not only with young families, but across all demographics The proposal was immediately accepted and a planning team was put together.

Church leadership realized that the best hope for a successful retreat was to maximize attendance, and to try to get folk from beyond the usual power structure to come and contribute. To that end, a number of parents with young children who still came on a regular basis, but who for various reasons had not joined boards and committees,  were button-holed and asked to come. It was also thought that having the retreat off church premises might help people think in new ways, and so arrangements were made to use a nearby church’s fellowship hall. Aware that some might be leery of losing a whole day to a retreat, it was decided to hold it from 9:00 until 1:00 on a Saturday, and to include a quick lunch.

The morning of the retreat found over forty church members gathered, including three of the targeted young parents. The meeting opened with a short worship service, including prayers for wisdom and guidance, and quickly got down to the business at hand.  Moderating was a member of the congregation who had a great deal of experience in the business world leading brainstorming and visioning sessions, and who knew that it was vital that everyone felt that their contributions would be welcome – so prohibited in the opening stage of the meeting was criticism of offered suggestions.

Soon large sheets of sticky-backed paper were filled with ideas for church growth, ranging from updating the web page to hosting more potlucks to placing more ads in the newspaper and so on. During a break, leaders divided the suggestions into four thematic groups, and then invited the gathered to divvy themselves up into groups to discuss, refine and prioritize the suggestions. 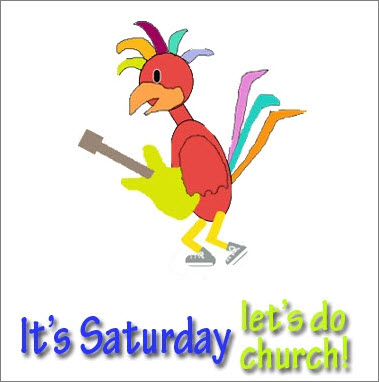 Towards the end of the time, the breakthrough came from a group that was discussing Christian education and spiritual formation. One of the parents of young children tentatively piped in, asking “Why is it that we don’t have a Saturday afternoon service like all our Roman Catholics neighbors do? To tell the truth, in our family we both work all week, and then on Saturday we are running around with the kids at soccer and hockey and music and drama and so on, and when Sunday gets here we just want to hang out and relax as a family. I think that is why we are losing people, and I know we would much rather come on Saturday afternoon, after the day’s activities are done and before we do something in the evening.”

Quickly another parent of youngsters jumped in, saying “That would be great for us! Especially if we could worship with our kids the whole time, and if that service was shorter, say 45 minutes, with contemporary music. We would totally do that!”

And no one said, “But we’ve never done that before.” And the pastor did not say, “But Saturday is my day off.” And the Board of Finance did not moan, “But where will we find the money?”

When the idea was presented to the entire group at the closing report-back session, everyone in the room sensed that something exciting was happening and were buzzing about the possibilities.  When the moderator explained that none of the projects were going to move forward on their own, and none were going to be assigned out to existing boards and committees, and that folk had to enlist in ad hoc groups to push their project through, there was no shortage of volunteers to help with the planning team for the Saturday service.

Click here to find out how it all turned out...  SPOTLIGHT: Saturday, Sing-A-Long, Shorter Service

Reed Baer is Senior Pastor of the West Parish of Barnstable