Rev. Rob Mark has been a major part of pushing the PCUSA to divest at their General Assembly, and Church of the Covenant is also home to Barbara Darling, who helped bring the resolution to divest the UCC at 2013 General Synod. At some point, says Rev. Rob, “we realized we had to get our own ducks in a row here.” Now the church has shifted their investments into a strategy offered by their Socially Responsible asset managers, Trillium Asset Management’s Fossil Fuel Free Core Strategy.

Rev. Rob gives testimony to the process of divestment at his congregation, sharing advice for other churches and the church’s rationale for divesting. Quips Rob, “The divestment movement is creative evangelism.”

Read the interview below:

Why did Church of the Covenant decide to divest from fossil fuels? We as a congregation feel that climate change is the most pressing moral issue of our time and as people of faith we need to begin to walk the talk. Divestment is one part in that larger challenge and invitation by the Holy Spirit.

As a congregation we were deeply inspired by the students in our midst, both those in our congregation and in our watershed, most particularly Harvard and Boston University, around divestment.

How time-consuming a process was it to divest from fossil fuels?
For Church of the Covenant, it was not a very time intense process, and it was a worthwhile investment of our time. We strengthened our sense of mission as a congregation. I think any time you have a congregational meeting that is focused on mission and our place in the world, instead of just focused on internal and polity-related issues, you stand to benefit no matter what the subject matter is.

Could you say a word or two about your process? Who were the main people involved in making this decision?
The process began within our Mission and Advocacy Committee. Their voices led the council to begin talking about this. The process then became that we had two congregational meetings. The first was with Trillium Asset Management. We invited them to come in and talk about their 5-year-old fossil free portfolio.

It was really helpful off the bat to know that your own investment group for years had been reading the sign of the times and paying attention to its clientele. We got a sense from those two meetings where the church was at, and the council voted unanimously that January to inform Trillium that we wanted to fully divest. There were no voices of opposition within the congregation or the council.

The 350 “Do the Math” tour was the very first time many members heard of divestment, which was before the resolutions. A group of us attended this tour when it came to downtown Boston, which resulted in some debates very early on, some members more in support of shareholder engagement, but it became unanimous by the time we considered it for our own congregation. 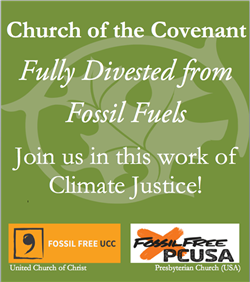 Any lessons learned or advice for how to make fossil fuel divestment easier for churches?
There are great resources out there, including 350.org, including the resolutions and the work of both FossilFree PCUSA and the UCC. For a congregation, looking at this in a multifaceted way is most helpful, including Sunday school, including congregational meetings, including adult ed., and including worship. It’s not a no-brainer for all congregations, and there are important debates and conversations to be had.

The most significant opposition in Presbyterian churches had been this notion that we don’t want to cut off relationships with the industry, and I would argue that it’s still possible to have relationships outside of purely economical relationships. We want fossil fuel companies to still be companies. Just not on the fossil fuel extraction faction, but as companies for true energy creation that honors creation.

Congregations could also begin the conversation with their finance/investment committees and ask them to ask their asset manager if they have fossil fuel free strategies, because it’s becoming more and more popular month by month. There’s even a big article in Fortune this past month which talks about all the economic benefits of going fossil fuel free.

Anything else to add?
I also want to say that Church of the Covenant is excited to be part of the process to build liturgical resources around divestment, climate change, etc.

And I want to add: The divestment movement is creative evangelism. And, if we’re not talking about this and acting on behalf of creation, we stand to lose our credibility with students and others that are excited about this movement for real change.

NOTE: Neither Church of the Covenant or the MACUCC endorses any one particular investment strategy. Always speak with your financial advisor before making investment decisions.

Patrick Cage served as environmental intern at the Massachusetts Conference, UCC for six months in early 2015.  He is a recent graduate of Yale College where he was an environmental studies major with a concentration in religion and the environment,