5/1/2015 - Justice and Witness
Share
The following sermon was offered by The Rev. Dr. Andrea Ayvazian of Haydenville Congregational Church, in recognition of the 100th anniversary of Armenian genocide by the Turks.

Psalm 22
During the spring of 2000, I went on a Lenten Journey to the Holy Land with a group of people of faith.  While there, we visited many ancient and holy sites including the Church of the Nativity in Bethlehem, which sits on top of the Grotto, or cave, where it is believed Jesus was born.

The Church of the Nativity is shared and maintained by three different churches: Roman Catholic, Greek Orthodox, and Armenian Apostolic.  Most of the Church is Roman Catholic, but in one part, like a side chapel, there is the Armenian section.

When our group visited the Church of the Nativity, I went first to the Armenian part, and was saddened to see that it was tucked off in a corner, as if it was secondary to the main body of the cathedral.  I took a seat and began to pray, noting all the representations of Armenian religion and culture around me— crosses, jewels, tapestries and Armenian writing.

While I sat there, trying to have a quiet and sacred moment, tourists and other people walked through the little chapel chewing gum, talking about where they would go for lunch, looking briefly at the decorations, and leaving quickly. I found it discouraging.

Then a side door opened, and dozens of Armenians came into the chapel.  They were carrying a coffin which they placed by the altar, and they began to make preparations for a funeral.  An Armenian cleric entered and there was much weeping and grieving for the one who had died. 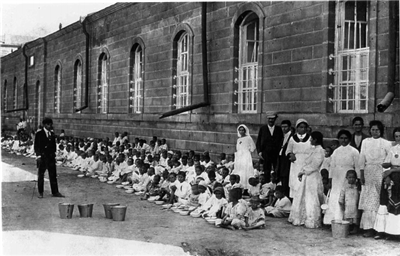 As the funeral service began, I was shocked to see that people kept walking through the chapel space with no regard for the service that was happening right in front of them.  Then someone came and removed a row of chairs—carrying them off with much commotion to another part of the Church.  Someone else came in and wondered aloud what was going on.  People walked right through the group gathered for the funeral, unwrapped cough drops, asked where they could buy postcards—they seemed oblivious, unable to even see the service in progress.

I fled.
I ran out the side door, into a courtyard, sat on a low stone wall, and sobbed.

It seemed to me my time in the Armenian chapel tucked in a corner of the big church was emblematic of the whole Armenian experience.  For so long, we have been ignored, overlooked, our culture devalued, our story denied.

I was inconsolable on that little stone wall.  I felt I was shedding the tears of generations.  The tears of my people.  The tears of my ancestors. The tears of those long dead who are still crying out for recognition and justice.  Most of all, I was crying for all those lost in the Armenian genocide.

It was on April 24, 1915, one hundred years ago this week, that Turkish soldiers in the Ottoman Empire rounded up almost 300 Armenian political leaders, educators, writers, clergy, and dignitaries in Constantinople (now Istanbul) and took them to the interior of Anatolia and then killed all but two of them.

That spring, the Turkish government ordered the systematic killing and deportation of the Armenian people.  Village by village, town by town, Armenian men were taken away and murdered.  Following a precise plan, Armenian women, children and the elderly were herded in long columns, and marched south to the Syrian desert.  Those on the “death marches” were exposed to extreme hunger and thirst, attacked regularly by the Turkish soldiers leading the march on horseback, and subjected to every conceivable form of humiliation and torture.  Most suffered horrific deaths along the way, and those who survived the march died alone in the Syrian desert. The Armenian people were effectively eliminated from their homeland of nearly 3000 years.

The details of the slaughter are unspeakable.

My father, Fred Ayvazian, who died six years ago, was a survivor.

My sisters and I grew up hearing the stories.  Our Dad called it “the massacres,” my Grandmother called it “the atrocities.” Many scholars agree that the killing of the Armenian people was the first genocide of the 20th century.

Just this week, on Friday, The New York Times had a front page article with the headline, “A Century After a Genocide, Turkey’s Denial Only Deepens.” The article said that Turkish authorities have consistently responded to evidence of the genocide “with silence and denial.”  The article goes on to say, “For surviving Armenians and their descendants, the genocide became a central marker of their identity, the psychic wounds passed through generations.”

So true.  The “silence and denial” by Turkey is a source of incomprehensible sorrow for the Armenian people.  To have the tragic, horrendous, unspeakable suffering that your people endured be repeatedly denied is painful, ahistorical, unjust, and crazy-making.

My father, may he rest in peace, spent his life writing about, giving interviews, and speaking about the genocide.  He drew attention to it in every way he possibly could.  Permanently scarred by the massacres, my father was tireless in his efforts to tell the truth.  His greatest hope was that during his lifetime, he would witness the Turkish government stop denying and admit to the atrocities of the Armenian genocide.

In a guest editorial in the Daily Hampshire Gazette written before his death, my father said, “For over four generations, the voices of Armenian survivors have asked for recognition of their genocide, for acknowledgement of their martyrs, and for correction of their history under the rule of Ottoman Turkey.”

Our story is horribly sad.  The trauma in our families is extremely profound.

The grief in our community reverberates in staggering waves of sorrow and sobs, like I experienced in the Church of the Nativity. 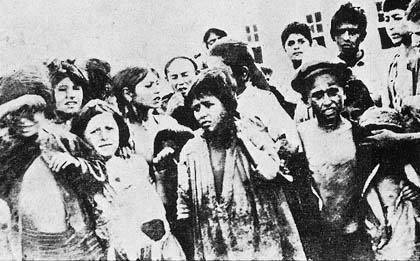 But it is also important to say that the Armenian people are strong, and vibrant.  We are witnesses to history.  We are courageous truth tellers.

We have been crushed, and have risen again.

And through it all, we have never lost our faith.

The Armenian Church is the world’s oldest national church.  Armenia was the first country to adopt Christianity as its official religion, in 301 C.E., and established a Christian church at that time.

And through the horrors, through the living nightmare when unmentionable suffering was inflicted on the Armenian people, we did not abandon our faith.

The Armenian people have never blamed God.  We have turned to God for comfort in the face of humiliation, torture and slaughter.

We heard in Psalm 22 read today how the Psalmist cries out in pain, just like the
Armenian people:
…I am…scorned by everyone…
7 All who see me mock me;
they hurl insults, shaking their heads.
12 Many bulls surround me;
strong bulls … encircle me.
13 Roaring lions that tear their prey
open their mouths wide against me.
My heart has turned to wax;
it has melted within me.
15 My mouth is dried up…
16 Dogs surround me,
a pack of villains encircles me;
they pierce my hands and my feet.
17 All my bones are on display;
people stare and gloat over me.
18 They divide my clothes among them
and cast lots for my garment.

But in despair and trial, the Psalmist still turns to God for comfort and help…
19 But you, Lord, do not be far from me.
You are my strength; come quickly to help me.
20 Deliver me from the sword,
my precious life from the power of the dogs.
21 Rescue me from the mouth of the lions;
save me from the horns of the wild oxen.
22 I will declare your name to my people;
in the assembly I will praise you.
Revere him…24 For he has not despised or scorned
the suffering of the afflicted one;
he has not hidden his face from him
but has listened to his cry for help.

That is the story of the Armenian people.  In the face of unbearable suffering, our people turned TO God for help, not AWAY from God in anger.  We believe that God is all loving but not all powerful; that God could not stop the suffering; that God would have stopped the genocide if God could have stopped the genocide.  But God provided what God always provides: comfort in the time of suffering, and peace at the time of death.

We know that God did not make the choice to exterminate the Armenian people.  The Turkish government made that choice.  Young Turks carried it out, soldiers complied, guards co-operated, and roving bandits along the death marches joined in.

There is a wonderful group in Boston called Facing History and Ourselves and they tell our story.  They have created a curriculum for school children that tells the story of the Armenian people fully, accurately, and completely.  And for that I am grateful.  Facing History and Ourselves has a motto that appears on their materials.  The motto is: “People make choices.  Choices make history.”

Today, people in the Turkish government are choosing to deny the genocide, still.

Today, people in the U.S. government are also choosing not to acknowledge the genocide, still.

The denial continues and is pervasive.  I have with me a volume of the Encyclopedia Britannica.  People who wrote the encyclopedia made the choice to alter our history, distort our story, and diminish our losses.  After pages on Armenian culture, alphabet, and food, the encyclopedia devotes four sentences to the genocide and claims that 600,000 Armenians were lost in the massacres.  That discounts almost one million people who were killed.

This week Pope Francis made a choice, and he made history.  Pope Francis, bless his heart, called the killing of Armenians genocide.  According to the New York Times, “Pope Francis described the World War I-era slaughter of Armenians by the Ottoman Turks as the first genocide of the 20th century, igniting a diplomatic confrontation with Turkey, which summoned the Vatican’s ambassador to condemn the pontiff’s remarks.”

People make choices.  Choices make history.
We need to emulate the Pope.
We need to make choices to tell the truth and to keep telling the truth…to demand that the truth be heard, recognized, and included in history books, school curricula, and encyclopedias.

Archbishop Desmond Tutu of South Africa says that the first step in the process of forgiveness is for the perpetrator of the pain to admit to the crime.

We must tell the Turkish government again that their denial of the genocide continues to cause the Armenian people to suffer, AND prevents their own people from moving forward.  The Turkish people cannot wrestle with the genocide in their past and try to heal those wounds if the atrocities are denied.

TURKEY, admit to the crime, and let us begin on the long road to healing.

We also need to tell our President that recognizing the genocide of the Armenian people matters more than cordial diplomatic relations with Turkey.  We cannot be true to our own values as a nation if we deny the injustice suffered by others.

The proud, strong, intense, and beautiful Armenian people have faced unspeakable suffering.  But through it all we never abandoned God.

We have praised God’s holy name, lifted prayers of thanksgiving for our stamina and resilience, thanked God for the Armenian diaspora with all its brilliance and courage, and prayed with devotion and power.

We know that people make choices.

The Armenian people have made choices and have made history…our history is one of struggle, suffering, endurance, resistance, bravery, truth-telling, and faith.

This week, on Armenian Martyrs’ Day, all over the world, we will continue to praise our God, and tell our story.