When the MA Conference Annual Meeting passed the first Open and Affirming Resolution in 1984, it would have been hard to foresee that 28 years later there would be 1,000 ONA churches across the country. That’s what happened on February 21, 2012, when The Pillar of Love Fellowship UCC in Chicago was added to the ONA registry.

The Rev. Ann B. Day and Donna Enberg, of Holden, MA, for 28 years the National ONA Program Coordinator and Administrative Staff Person, respectively, consulted with, educated and registered most of those churches. They also shepherded most of the Massachusetts Conference ONA churches, which now number 110. Beginning in 2007, I began working as National ONA Consultant with The Coalition, consulting with and listing the most recent churches, the first of which was The Townsend (MA) Congregational UCC, ONA Church #732. 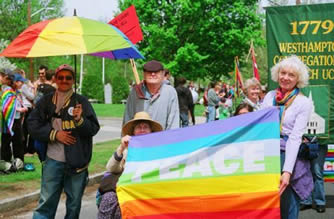 Just over 10% of all ONA churches in the UCC are in the MA Conference. Nationally, there are many UCC conferences, seminaries, new church starts, campus ministries and other settings that have adopted ONA covenants. The Andover Newton Theological School and The Harvard Divinity School are ONA seminaries. A Different Christian Voice, the new church start in Middleton, MA, started in 2011, began as an ONA church.

This milestone of 1,000 is wonderful. Each ONA church story represents a significant and faithful step and a promise to bring about safety, hope and wholeness for lesbian, gay, bisexual, transgender, and questioning people who deserve to know that God’s love is for them.   It also means that there are many churches where no such formal covenant has been made. Those may be places where LGBTQ youth are growing up in uncertainty and even fear. There is much work to be done to spread affirmation and inclusion, even as we celebrate this 1000th church.

Read more about the milestone of 1,000 ONA churches here.